#BBNaija: “My Boyfriend Will Be Proud of Me” - Nini Tells Saga


Recall that Saga is very much in love with Nini and doesn't hide it as he's with her everywhere she goes in the house. 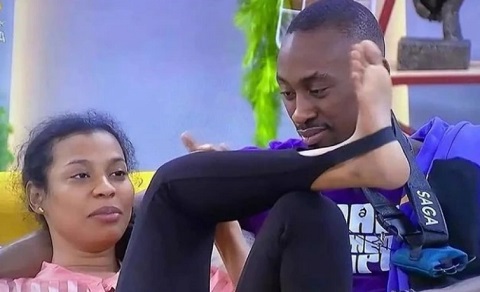 Nini and Saga
Big Brother Naija season 6 housemate, Saga has been reminded that he is setting himself up for heartbreak after Nini told him that her boyfriend will be proud of her.
Recall that Saga is very much in love with Nini and doesn't hide it as he's with her everywhere she goes in the house.
On Monday Nini was up for possible eviction before the Head of House game, however, she won veto power for the week and saved herself.
Saga then praised her and noted that he’s proud of her but she immediately replied that her boyfriend outside the house will be more proud of her.
“My boyfriend will be proud of me”, Nini told Saga.
Saga who doesn’t seem pleased with Nini’s response had a look of defeat on his face.
Meanwhile, fellow housemate, Angel has expressed worry over Saga’s relationship with fellow housemate, Nini.
Angel in a conversation with Pere, Cross and Queen after the live eviction show on Sunday night, stated Saga is setting himself up for heartbreak waiting for him outside the house.
Top Stories