The duo was arrested with 10 jerry cans of 25 litres filled with fuel and a tricycle. 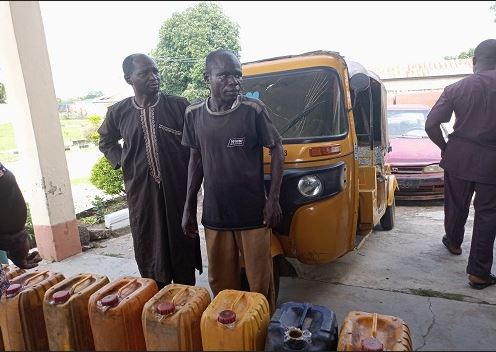 A 51-year-old suspect identified as Umar Mohammed has been arrested by the Niger state police for allegedly supplying petroleum products to bandits.

He was arrested alongside Adamu Atiku, 35, who is a fuel attendant of Muhabbat filling station in Bosso Estate in Minna.

The duo was arrested with 10 jerry cans of 25 litres filled with fuel and a tricycle.

Umar Mohammed, when paraded, confessed that they were caught while trying to convey the fuel to Gussassi village in Maikunkele area of Bosso local government.

Umar claimed that they sell the petroleum product to motorcycle operators in Gussassi village and its environs.

Parading the suspects before newsmen in Minna, Niger Commissioner of Police, Monday Bala Kuryas, said that the suspects were arrested on a tip off over the activities of the suspects.

He explained that the amount of fuel they brought was contrary to the Niger State Executive Order, which banned the sale of petroleum products in large quantities in jerry cans or other containers at filling stations across the state.

Kuryas said that investigation is ongoing to know exactly who they give and sell the fuel to, adding that the suspects would be arraigned in court as soon as the investigation is concluded.

The Commissioner assured the Police would continue to work towards ensuring the safety and protection of the people.