The defendant allegedly swindled three men — Mohammed Hassan, Fati Buba and Falmata Fali — by separately selling to them a piece of land on Damboa Road, Maiduguri. 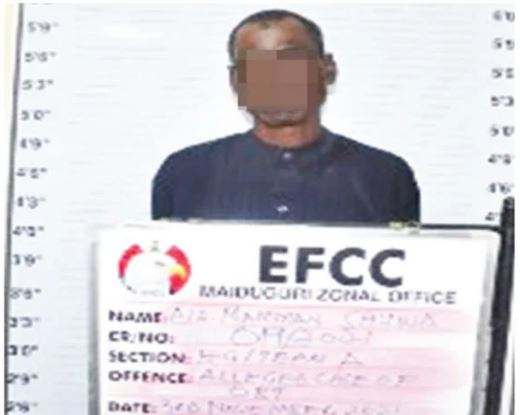 The Economic and Financial Crimes Commission has arraigned a man, Mohammed Gapchia-Gana, aka Mamman Shuwa, before Justice Aisha Kumaliya of the Borno State High Court, Maiduguri, on three counts of criminal breach of trust and fraud.

The defendant allegedly swindled three men — Mohammed Hassan, Fati Buba and Falmata Fali — by separately selling to them a piece of land on Damboa Road, Maiduguri.

The Head of Media and Publicity, EFCC, Mr Wilson Uwujaren, in a statement, said investigation revealed that after the commencement of construction on the land by one of the complainants, the Borno State Geographic Information Services demolished the structure on the grounds that the piece of land was a government layout and not owned by the defendant.

This led the complainants to write a petition against Gapchia-Gana.

The charges read in part, “That you, Mohammed Gapchia Gana, aka Mamman Shuwa, sometime in December 2019, in Maiduguri, Borno State, within the jurisdiction of this honourable court, did with intent to defraud, obtained the sum of N850, 000 from Mohammed Hassan under the false pretence of sale of land at 44G, behind Federal Road Safety Corps office, along Damboa Road, a claim which you knew to be false, thereby committing an offence contrary to Section 1(1) (b) of the Advance Fraud and Other Fraud Related Offences Act, 2006 and punishable under Section 1(3) of the same Act.”

According to the statement, the defendant pleaded not guilty to the three counts preferred against him by the anti-graft agency.

The prosecution counsel, Fatsuma Muhammad, asked the court for a trial date and prayed the court to remand the defendant in a custodial centre.

Justice Kumaliya adjourned the matter till November 29, 2021, for commencement of trial and ordered that the defendant be remanded.