The victim was trying to collect money from the truck’s driver when his foot slipped and he was crushed to death. 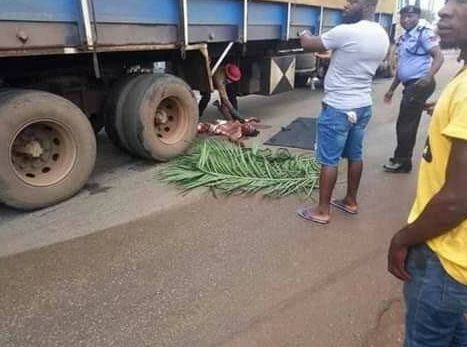 A man identified as Usman Salakani has been crushed to death by a trailer in Ilorin, the Kwara State capital.

The incident happened at the popular Post Office roundabout about 10am on Thursday, while the deceased was reportedly attempting to collect money from the truck driver.

"The incident occurred at around 1015 hours on Thursday when the victim was trying to collect money from the truck’s driver when his foot slipped off and was subsequently fell down by the truck tyres and crushed to death by the rear tyre of the truck," Babawale stated.

Officials of the NSCDC Crisis Management Department and the Kwara State Transport Management Authority (KWATMA) later evacuated the remains of the victim from the scene of the accident.

Speaking at the scene of the accident, a newspaper vendor at the Post Office junction, Mr Yusuf Idris, said that the victim had been discussing politics with him prior to the accident.

"The deceased ran after a moving trailer but, unfortunately, his hands slipped and fell under the truck tyres," the vendor said.