Police said the suspects were arrested following complaints about sea pirates in the area. 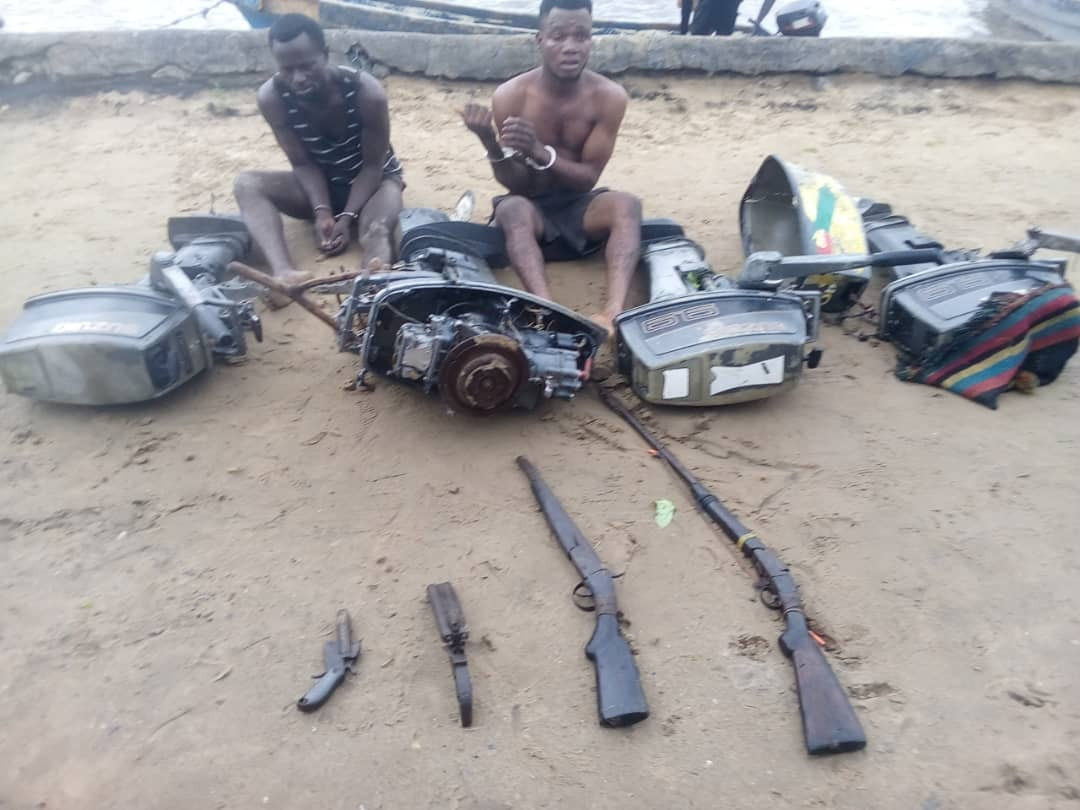 The arrested sea pirates
Two suspected sea pirates have landed in trouble after being arrested by the Akwa Ibom State Police Command.
The duo were arrested in possession of firearms and four stolen engine boats .
Spokesperson of the command, SP Odiko Macdon, who dsiclosed this in a statement on Tuesday, November 9, said the suspects were arrested following complaints about sea pirates in some parts of Akwa Ibom State waterways.
"The Commissioner of Police, Akwa Ibom State, CP Andrew Amiengheme commenced special tactical deployments to make the waterways safer. These deployments are beginning to yield positive results," he stated.
"Relying on a robbery complaint on 6/11/2021 at about 11:45am, Operatives of Mbo Division, led by the DPO, SP John Abua, arrested one Ability Emmanuel Okpet a.k.a “Blacky” ‘m’ at Ibaka in Mbo L.G.A.
"His confessions caused the DPO to lead a joint team of Police Operatives and the Nigerian Navy, Forward Operation Base, Ibaka to arrest one Joshua Ezekiel a.k.a “Gogo” m’ of Andoni L.G.A, Rivers State, but residing at Esuk Ewang in Mbo L.G.A,"
SP Macdon said the suspects conspired with other members of their gang, now at large, in separate robbery operations.
The suspects on 3/11/2021 at about 9:00pm, along Point three High Sea, robbed four fishermen of their fishes, 15 horse power outboard engine, valued at seven hundred and seventy-five thousand naira (N775,000.00), two G.S.M phones valued at forty-five thousand naira (N45,000.00)
During interrogation, the suspects confessed to the crime and led the operatives to where one one locally made pistol, one locally made double barrel short gun and two locally made long barrel guns used for the operations were hidden in a shallow pit.
Other exhibits recovered from the suspects include, three stolen 9.9HP Suzuki Outboard Engines, one 40HP Yamaha Outboard Engine, one itel phone and two bottles of concoction.
"While efforts are ongoing to arrest other fleeing gang members, the suspects will be charged to court at the completion of investigation." the PPRO added.
Top Stories