It was learnt that motor parks, banks, shops and markets across the major cities of Awka, Onitsha and Nnewi, were shut down. 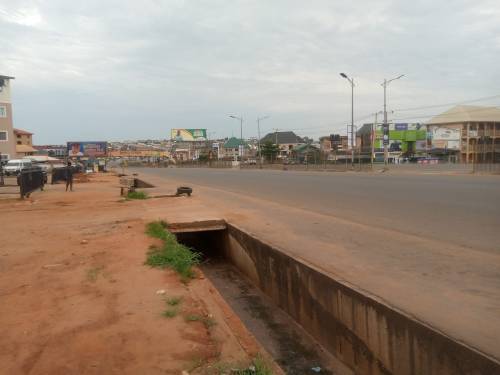 It has been revealed that some residents of Anambra State, on Wednesday, observed the sit-at-home in solidarity with Nnamdi Kanu, leader of the Indigenous People of Biafra, IPOB who appeared in court earlier today, according to SaharaReporters.

It was learnt that motor parks, banks, shops and markets across the major cities of Awka, Onitsha and Nnewi, were shut down.

However, town service buses, like shuttle buses, Keke, motorcycles, were sighted operating on streets and compound shops were also half-door open to serve the people around the neighbourhood.

A trader at Awkuzu junction, in Oyi Local Government Area of the state, Mama Opeyemi who spoke with Tribune, appealed to the Federal Government to release Nnamdi Kanu, noting that the non-indigenes were the ones suffering the most heat of the order, “because anything we do here involved money.”

“I am appealing to Baba Buhari to leave Nnamdi Kanu alone so that our businesses will return as usual. Since Saturday, last week, we have been at home as a result of the just concluded governorship election and today again, another sit-at-home. I am begging President Buhari to pity us and free Nnamdi Kanu,” she said.

A lawyer, Oguwike Nwosu, stated that the Federal Government was happy that the South-East was being constantly locked and would like it to continue since it did not in any way threaten the cattle business.

However, another person said whether the Federal Government likes it or not, the people of South-East are not complaining and not bothered if the sit-at-home lasts forever.

He said, “What the people of South-East are demanding are equity and fairness and equal treatment in the project called Nigeria.”

According to Patrick Acholonu, a trader, “People should not worry about what we are losing in terms of commercial and business gains. We can equally get them back because we are Igbo.

“It is better we fight for equal treatment or our freedom now and end the suffering and attempt by the present government to exterminate us than trading every day and making money.

“You can make all your money, but an oppressive government can take all those gains with one anti-Igbo policy.”

Meanwhile, Kanu, who appeared in court on Wednesday, was later returned to the custody of the Department of State Services, following a misunderstanding.

The IPOB leader protested the refusal of the Department of State Services, DSS, to allow some lawyers access into the Abuja Federal High Court particularly his American lawyer, Bruce Fein.