In an internal memo issued on Tuesday, the Managing Director of NRC, Engr. Fidet Okhiria, alerted all district managers and relevant officers of the need to protect railway assets in the event the strike goes ahead. 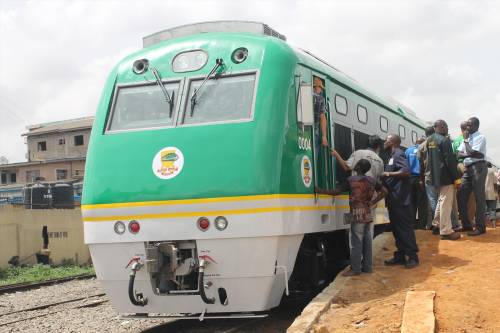 According to a report by SaharaReporters, the Nigerian Railway Corporation (NRC) has directed district managers to be prepared to shut down train stations plying Abuja-Kaduna, Lagos-Ibadan and Warri-Itakpe routes in the event that workers down tools.

In an internal memo issued on Tuesday, the Managing Director of NRC, Engr. Fidet Okhiria, alerted all district managers and relevant officers of the need to protect railway assets in the event the strike goes ahead.

The three-day warning strike by workers of the Nigerian Railway Corporation (NRC) is to hold from November 18th to November 20th.

A letter titled, “Notice and Directive to embark on 3-day warning strike nationwide,” dated November 12th, had been addressed by the District Chairman/Secretary Nigeria Union of Railway workers and Senior Staff Association.

The workers’ unions had resolved “that all the district organs (DWCs) of the NUR and SSA should, as a matter of expedience, summon a general meeting of all the workers of their districts on Monday, 15th November 2021 at exactly 10.00 a.m prompt and, in unambiguous terms, notify the entire workers of the commencement of a 3-day warning strike beginning from midnight prior to Thursday, 18th through Saturday, 20th November 2021.”

The Minister of Transportation, Rotimi Amaechi had invited the labour unions to a meeting on Saturday but it ended in a deadlock.

However, Okrikha said if no truce is reached, train service should be shut down with effect from Wednesday night.

The memo read, “The RDMs, managers and coordinators are to prepare and shut down train services appropriately by midnight of Wednesday, 17th November 2021.”

The memo also directed the officials to move all locomotive and coaches for Abuja-Kaduna, Warri-Itakpe and Lagos-Ibadan train services to safe places.

The MD further directed that all revenue collected should be banked by Wednesday.

General Secretary of the Nigerian Union of Railway Workers (NUR), Comrade Segun Esan, in a chat with Daily Trust last night said the mobilisation for the warning strike had been massive, adding there was no going back.

“The strike starts on midnight of this Wednesday prior to the dawn of Thursday 18/11/2021. The mobilisation for the strike is unprecedented and the entire NRC workers are top gear for the warning strike,” he said.