The U.S. Secretary of state Antony Blinken has been queried by a US agency over removal of Nigeria as religious freedom violator. 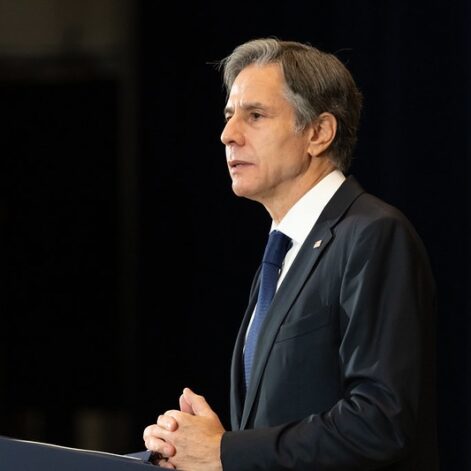 Blinken
The U.S. Commission on International Religious Freedom (USCIRF) is worried that Nigeria has been delisted from the list of religious freedom violators by the United States.
USCIRF said it found it unexplainable that the U.S. Department of State did not redesignate Nigeria as a “Country of Particular Concern” (CPC).
Rather, the state department treated Nigeria as a country with no severe religious freedom violations.
“USCIRF is disappointed that the State Department did not adopt our recommendations in designating the countries that are the worst violators of religious freedom,” said USCIRF Chair Nadine Maenza in a statement Wednesday night.
“While the State Department took steps forward on some designations, USCIRF is especially displeased with the removal of Nigeria from its CPC designation, where it was rightfully placed last year, as well as the omission of India, Syria, and Vietnam.
“We urge the State Department to reconsider its designations based on facts presented in its own reporting.”
Read the rest of the statement:
Pursuant to the International Religious Freedom Act (IRFA), the countries the State Department designated as CPCs are Burma, China, the Democratic People’s Republic of Korea, Eritrea, Iran, Pakistan, Russia, Saudi Arabia, Tajikistan, and Turkmenistan, all besides Russia previously had been designated.
USCIRF recommended CPC designation for all 10 in its 2021 Annual Report and also recommended that India, Nigeria, Syria, and Vietnam be designated as CPCs.
The State Department placed on its “Special Watch List” (SWL) Algeria, Comoros, Cuba, and Nicaragua.
USCIRF recommended in its 2021 Annual Report that Afghanistan, Azerbaijan, Egypt, Indonesia, Iraq, Kazakhstan, Malaysia, Turkey, and Uzbekistan also be placed on the SWL.
USCIRF recently released a factsheet reiterating its CPC and SWL recommendations, which explains the religious freedom violations in these countries supporting USCIRF’s recommendations.
While USCIRF is concerned about the lack of designations for countries USCIRF recommended, Russia’s designation for the first time as a CPC for engaging in systematic, ongoing, and egregious violations of religious freedom is welcomed.
“USCIRF has proposed this action since 2017. For years, USCIRF has raised the alarm regarding the Russian government’s purge of ‘non-traditional’ religions and religious freedom repression,” said USCIRF Vice Chair Nury Turkel.
“USCIRF also applauds the inclusion of Algeria in the State Department’s SWL designations this year, which USCIRF has recommended since 2020 due to continued enforcement of blasphemy laws and restrictions on houses of worship for minority religious communities.”
USCIRF also welcomed the State Department’s designations of nine Entities of Particular Concern (EPCs), which are non-state actors that engage in systematic, ongoing, and egregious violations of religious freedom pursuant to IRFA.
USCIRF recommended the designation of seven of these actors including al-Shabaab, Boko Haram, the Houthis, Hay’at Tahrir al-Sham (HTS), Islamic State in the Greater Sahara (ISGS), Jamaat Nasr al-Islam wal Muslimin (JNIM), and the Taliban in its 2021 Annual Report.
Top Stories