Her planned arraignment had before now, been stalled five times due to her persistent absence in court and public holiday. 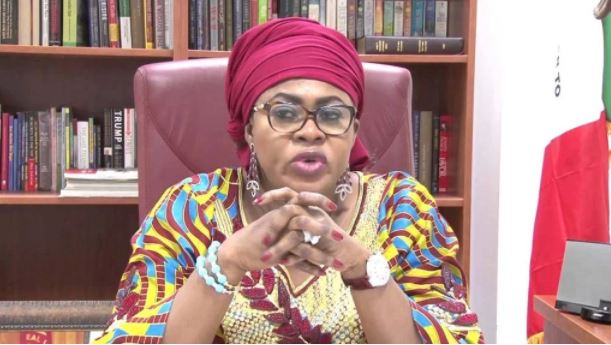 Oduah
An ex-Minister of Aviation, Mrs Stella Adaeze Oduah has arrived the Federal High Court in Abuja to escape arrest after stalling her fraud case.
She arrived the court to take her plea in the alleged N7.9 billion fraud charges brought against her by the Federal Government.
Her planned arraignment had before now, been stalled five times due to her persistent absence in court and public holiday.
Justice Inyang Eden Ekwo had on July 12 threatened to issue warrant of arrest for Mrs Stella Oduah should she fail to make herself available for arraignment on the then adjournmed date of October 19, which later fell on holiday.
The arrest threat was issued following her non appearance to honour court proceedings of July 12 without any explanation from her side.
The last attempt to dock her on Tuesday, October 19, for the money laundering case was scuttled by the Eid el Maulud holiday declared by the Federal Government to celebrate the birth of Prophet muhammad.
DAILY POST, however, noticed that Mrs Oduah, now a Senator representing Anambra North Senatorial District in the National Assembly arrived in court as early as 8am to face trial on a 25-count charge, alongside four others.
Senator Oduah was accompanied to court by a retinue of security details, friends and political associates.
At the time of this report, the Senator is having a last minute pre-arraignment conversation with her lead counsel on the next line of action.
The Economic and Financial Crimes Commission (EFCC) is alleging that Mrs Oduah misappropriated the N7.9B public funds while serving as a minister under former President Goodluck Jonathan’s regime.
Other defendants are Gloria Odita, Nwosu Emmanuel Nnamdi, Chukwuma Irene Chinyere, Global Offshore, and Marine Limited, Tip Top Global Resources Limited, Crystal Television Limited, Sobora International Limited, and a foreign construction Company.
They are charged with conspiracy and money laundering, as well as maintaining anonymous bank accounts.
The prosecution counsel, Dr Hassan Liman, a Senior Advocate of Nigeria, SAN, has also arrived court in company of about 12 other lawyers to present the government case against the defendants.
Liman had earlier told DAILY POST that 32 witnesses have been lined up to testify against Senator Oduah and eight others with a view to establishing the fraud charges against them.
Top Stories