The deputy governor who received the report promised that the state government will study the report and its recommendations and issue a White Paper in response. 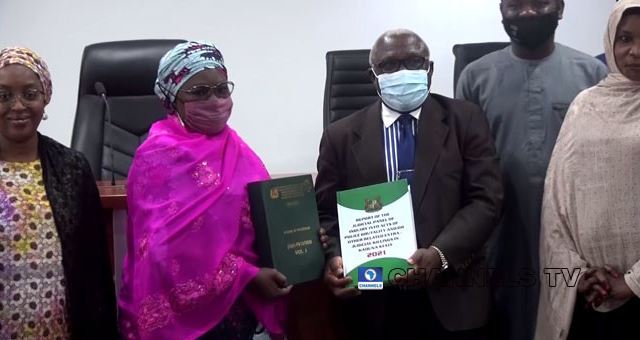 The Kaduna State Judicial Panel of Inquiry into Acts of Police Brutality and Other Related Abuses have submitted the report from the EndSARS protest to the deputy governor of the state, Hadiza Balarabe on Monday, December 13.

Describing policing in the country as a "national emergency", Balarabe called for a quick devolution and decentralisation of policing in other to enhance their effectiveness and get the confidence of the people.

The deputy governor who received the report promised that the state government will study the report and its recommendations and issue a White Paper in response.

“Every state government is aware of the prevailing anomaly in policing: the deployment in all the states of police officers controlled by the Federal Government but whose operations are funded by state governments. As recommended by the APC Committee of The Federalism chaired by our Governor, Malam Nasir El-Rufai, it is time to devolve policing powers and institute the necessary safeguards for lawful conduct and the protection of human rights.

“The crisis of policing remains a national emergency. It is in the interest of everyone that our country builds an efficient police force, large enough to be effective, sufficiently decentralised to understand the terrain and build local support, properly trained, equipped and resourced for the job and operating with the highest regard for the law and rights and dignity of citizens.

“As I receive this report, I wish to register the gratitude of the Kaduna State Government, to Hon. Justice David Shiri Wyom and the seven other members of this Commission of Inquiry for their service.

“The government will study the report and its recommendations and issue a White Paper."

Chairman of the panel, Justice David Nyom who also spoke during the presentation, said the panel heard a total of 43 petitions out of the 64 petitions it received after evaluating the evidence and considering the exhibit tendered and admitted.

Six petitions were struck out on the application of Petitioners and or Counsel, and 13 others struck out due to lack of merit.

The panel recommended payment of compensation to 23 petitioners in the total sum of two hundred and seventy-one million five hundred thousand naira for deaths, injuries, permanent incapacitation, and others.

It also recommended the prosecution of some erring police officers as well as the compliance by the Police of rulings/orders of the High Courts.

Kaduna state and Federal Government were also asked to assist in directing the Police to release corpses of persons they deposited in the mortuary to relatives and petitioners for burial, noting that such people cannot afford the bill charged by the hospitals and for the fact that it was the Police who deposited same.