The protesters have also called for the resignation of President Muhammadu Buhari, whom they said has failed woefully. 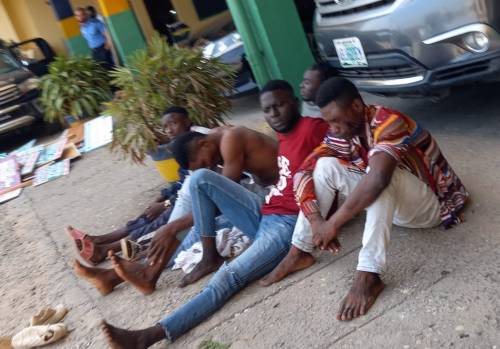 Some of the detained protesters

According to a report by SaharaReporters, the Alliance on Surviving COVID-19 and Beyond has called for the immediate release of the #NorthIsBleeding protesters who were arrested and detained by security operatives during a peaceful protest against insecurity in the North.

For days now, protests against insecurity have rocked the Northern region alongside social media with hashtags such as #SaveTheNorth; #NorthIsBleeding; #SecureOurLives among others as protesters condemn incessant killings and attacks by bandits.

The protesters have also called for the resignation of President Muhammadu Buhari, whom they said has failed woefully.

However, security operatives have at several times interrupted the protests, brutalising and harassing the peaceful protesters. And while some have been released, some are still behind bars.

Reacting on Thursday, a human rights lawyer, Femi Falana (SAN), who is also the Chairman of ASCAB, in a statement signed on behalf of the group, condemned the breach of the fundamental right of the protesters citing section 83(4) of the police establishment act.

ASCAB also recalled that Buhari in 2014 partook in a protest during the Goodluck Jonathan administration and was not harassed by the police.

A statement from ASCAB reads, “Yesterday, some young people participated in a peaceful protest against increasing insecurity in the northern part of Nigeria. In utter breach of the fundamental right of the protesters, the Nigeria Police Force violently disrupted the rally and arrested some of the participants.

”In stopping the peaceful rally, the police violated the fundamental right of the unarmed protesters and others who were earlier arrested in Kano, Kaduna and Sokoto by the Police and the State Security Service.

“By abruptly stopping the protests, the security forces breached section 83 (4) of the Police Establishment Act which requires the police to provide adequate security for citizens who participate in peaceful meetings and rallies.

“However, in demanding for the immediate and unconditional release of the detained protesters, the ASCAB is compelled to remind the police authorities that on November 20, 2014, the leaders of the All Progressives Congress, led by President Muhammadu Buhari took part in a protest against insecurity under President Goodluck Jonathan without any harassment whatsoever.”