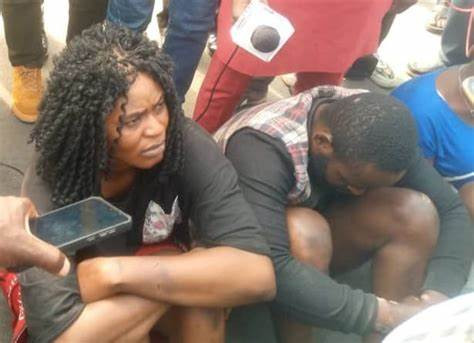 Mr and Mrs Onyekachi Alozie, a Nigerian couple in Imo State have been arrested by the police.

They were nabbed for allegedly kidnaping and killing a 75-year-old man, Chief Precious Okoli.

The couple were said to have carried out the act with their gang members.

Hussaini said; “Following a kidnap incident in Orlu on December 8, of one Chief Okoli Precious, aged 75, and was reported on December 11, by his son, one Fabian Ubochi, where it was suspected that he had been murdered by his abductors.

“Sequel to the report, the command’s Anti-Kidnapping Unit through technical analysis of intelligence, were able to identify, locate and arrest one Agubata Maxwell Joel Chimezie and the victim’s ash-coloured vehicle was recovered from him where he took it to a motor spray painter’s Workshop to changed the colour of the vehicle.

“On interrogation he made Confessional Statement revealing how they kidnapped the victim and led the Police detectives to the house of his accomplice. On arrival at the house of the suspect, one Onyekachi Alozie on sighting the Police, jumped down from a story-building and took to his heel thus, his wife, Oluchi Alozie, was arrested and taken to the Police station.

“On interrogation, she confessed to have featured prominently in lots of kidnapping incidents carried out by her husband and his syndicate. She further revealed that it was the husband, Onyekachi Alozie, who hatched the plan with his gang members to use her, to lure the victim out of his house to a lonely place where he was kidnapped.

“It may interest you to know that Agubata Maxwell Joel Chimezie and Onyeka Alozie met themselves in the Nigerian Correctional Service, Owerri, Imo State, where they were standing trials on criminal charges ranging from armed robbery, Kidnapping and Human trafficking, before 5th April 2021 jailbreak where they escaped, regrouped and formed a new syndicate of kidnapping and armed robbery gang.

“Again, in the course of our investigation, it was revealed that Oluchi Alozie was having an affair with the kidnapped victim, Chief Precious Okoli, and her husband, Onyekachi Alozie was aware and used her to lure him to her residence at Nkume in Njaba LGA of Imo State, and later they moved to a lonely road, where her husband and his gang members came out of the bush and kidnapped him at gunpoint and zoomed off in his car to an unknown destination.”