I Rejected Use Of Mobile Phones For Over 1 Year When It Was Introduced To Nigeria – Communications Minister, Pantami


He made the disclosure as a way to allay the negative speculations on the deployment of the 5G network in the country. 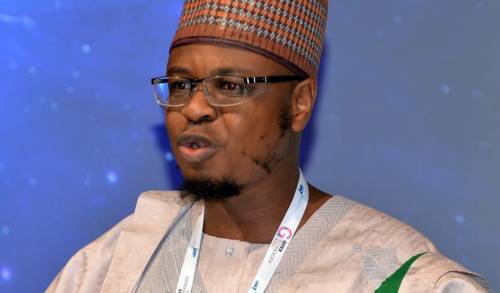 Isa Pantami, Nigeria’s Minister of Communication and Digital Economy, says Nigerians have the right to be sceptical about the deployment of the 5G Network in the country due to certain beliefs they hold.

Pantami, who is the Chairman of the National Frequency Management Council, said he was one of those who kicked against the use of mobile phones when it was first introduced in the country.

He made the disclosure as a way to allay the negative speculations on the deployment of the 5G network in the country.

Pantami spoke at the public presentation of National Policy on 5G Network and Spectrum for 5G Deployment and the hand-over of the 3.5 gigahertz spectrum to the Nigerian Communications Commission in Abuja.

He said he was against the use of mobile phones because of negative beliefs he held at the time.

However, he attributed some of the theories about 5G in Nigeria to false information circulated by people with no substantial evidence to show for their rejection.

The Minister said, “In 2020 if I could recall vividly in April and May, it was something else. Many citizens were complaining that 5G brought about COVID-19. You know how crazy we are in this country. Anything you drop without looking at the source or authenticity, people will take it.

“I can personally recall that when mobile phones came into Nigeria, some people resisted and there was an allegation that it was linked to cancer and many more.

“I will not feel shy to say that even my humble self, I couldn’t accept the use of mobile phones till after one year. A friend of mine who was working here in Abuja then purchased the mobile phone, and SIM card and sent it to me and said I must use it.

“Maybe he wanted to keep in touch with me so he compelled me to accept mobile phones then. This is to show you that that is our nature. Sometimes we tend to be conservative in doing that.”

On the 5G, he stated that the government suspended the deployment of the technology to address the concerns of Nigerians which was important to the Muhammadu Buhari administration.

He said, “If one person is to be infected by COVID-19 virus, then I should be number one in Nigeria.

“Yesterday I did another Covid test prior to the Federal Executive Council, it was my 52nd test and I’m grateful to almighty Allah that all of them are negative.”

Nigerians have described Pantami, an Islamic cleric, as a closet extremist after the Islamist views he held in the past came to light in 2021.

The Buhari government, however, said it would stand by the minister.

Pantami expressed views sympathetic to groups such as al-Qaeda and Boko Haram.

In a sermon from the 2000s, he said he considered al-Qaeda founder, Osama Bin Laden, a better Muslim than himself. For instance, in a 2006 speech, he publicly offered his condolences after the death of al-Qaeda's leader in Iraq, Abu Musab al-Zarqawi.

In another, he said he was happy when infidels were massacred.