The governor said that the youths who received the money as start-up funds had earlier been trained in different skills. 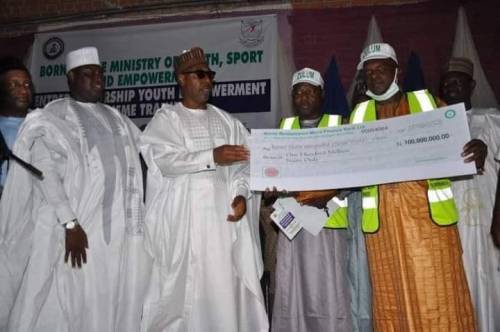 Prof Babagana Zulum, the Borno State Governor, has doled out large sums of money to 152 reformed youths who were members of a violent political group known as ECOMOG with N100million, after they reportedly renounced thuggery.

The governor said that the youths who received the money as start-up funds had earlier been trained in different skills.

He added that the empowerment was a demonstration of his commitment to ensuring a better future for youths in the state.

Zulum had at different times in the past approved series of vocational jobs and empowerment programmes for the groups to make them have access to lawful means of livelihood.

It would be recalled that in July 2019, which was two months after assuming office, Governor Zulum had announced a ban on political thuggery in Maiduguri, which, in the mid 2000s, came under bloody clashes between rival thugs including killings.

He also launched a vocational employment scheme to support the youths.

In 2020 and 2021, Zulum extended his ban on political thuggery to Biu and Gwoza, both of which have had notorious prevalence of thuggery. The governor later announced a statewide ban on the menace.