Chief Press Secretary to the governor, Nathaniel Ikyur, in a statement said the victims were killed on Saturday at about 5:00pm. 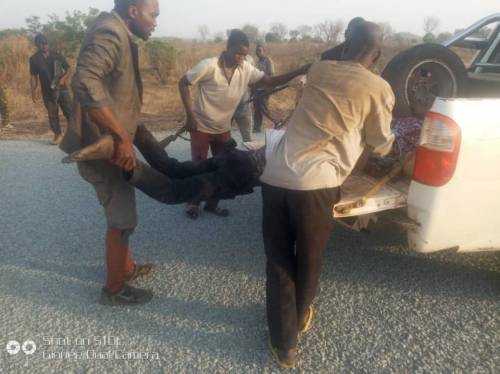 According to SaharaReporters, three kinsmen of Benue State governor, Samuel Ortom, have been killed by gunmen suspected to be Fulani herdsmen.

Ortom is from Tse-Apera, Nzorov District under Guma Local Government Area of the state.

Chief Press Secretary to the governor, Nathaniel Ikyur, in a statement said the victims were killed on Saturday at about 5:00pm when the gunmen laid an ambush and blocked the Lordye-Gbajimba Road.

The statement reads, “At about 5:00pm Saturday, February 19, 2022, suspected Fulani gunmen killed two males and a female while returning from a burial along Iordye-Gbajimba Road in Guma Local Government Area of Benue State.

“The victims were riding on a motorcycle when they were ambushed and shot dead by the killer herdsmen. The two died on the spot from gunshot wounds while the other was brutally macheted to death.

“Sadly, this has been the plight of Benue indigenes in the hands of Fulani herdsmen who have invaded the state in a bid to take over our ancestral lands.”

The latest incident comes a few days after five persons including a father and his son, were killed by suspected armed herdsmen in an attack on Tse Udeghe community, Mbakpa Council Ward and Ahumen community in Gwer West Local Government Area of the state.