The woman was reunited with her son after her ex-husband, Malam Musa Mamuda took her child to the Niger Republic. 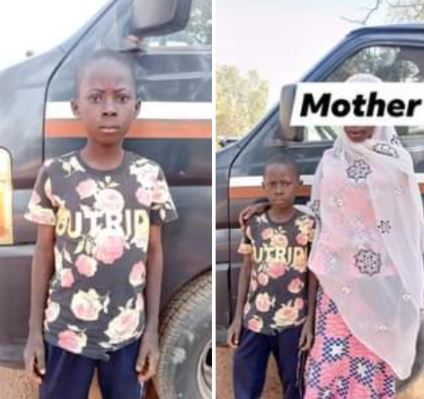 A 13-year-old boy, Auwal Musa Adam, who was separated from his mother, Aisha Hassan Kachako of Unguwar Nasarawa, Kachako, Kano State after eleven years has been reunited with her through the aid of  Peace and Management Unit (PCM) of the Nigeria Security and Civil Defence Corps (NSCDC) Jigawa State Command.

Spokespesperson of the command, CSC Adamu Shehu, who disclosed this in a statement said that mother and son were reunited on Thursday, March 3.

"The mother (Aisha Hassan), lodged a complaint at the State Command on 17th February, 2022 that her ex-husband, Malam Musa Mamuda took her child to Niger Republic, alleging that he was trafficked after their divorce," the statement reads.

"Upon receiving the complaint, the father Musa Mamuda was invited by the Peace and Conflict Management Unit of the Command. Investigation revealed that the the ex-husband went away with the embattled child and kept him in the custody of his maternal aunt.

"The Command directed the father to produce the child within two weeks or face the wrath of the law. Arrangement was made on how the boy will be brought back and the he was reunited with his mother after eleven year separation.

"It was a joyous moment for the mother when she sighted her child. Unfortunately, the child could not recognize her due to the fact that he was 'bereaved' when he was two years old.

"The father stated that after their separation, he took the child to his aunt in Niger Republic due to the alleged questionable character of his ex-wife.

"The PCM unit is making effort towards reconciling the parents and see who gets the custody of the child without prejudice to his mental and psychological health. If that cannot achieved the case will be referred to court."