Okafor, who said he is an economic migrant to Ukraine, disclosed that in a worst case scenario, he would leave Ukraine for any other country but definitely not Nigeria. 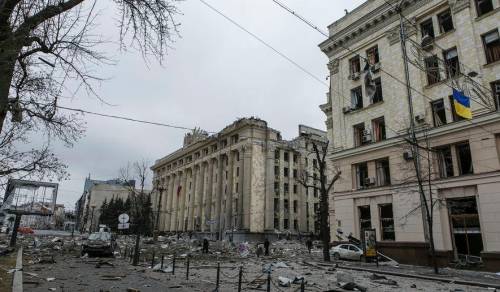 Scene of a shelling in Ukraine

Nnamdi Okafor, a Nigerian man, has rejected the evacuation of Nigerians in Ukraine by government, stating that he preferred to remain a refugee in the European country.

The young man stated this during an interview with TheNiche.

“What am I coming back to Nigeria to do? Has anything changed in our country,” the 32-year-old from Anambra State, queried.

Okafor, who said he is an economic migrant to Ukraine, disclosed that in a worst case scenario, he would leave Ukraine for any other country but definitely not Nigeria.

Narrating his ordeal in Nigeria, Okafor said, “For now, I am still in Ukraine. I used to live in the capital city, Kyiv, but I have moved to one of the border towns which is relatively safe presently.

“But if the war reaches there, I will escape to another country by the grace of God. But if death becomes my destiny, so be it. I would rather remain here a refugee than return to Nigeria.”

Asked why he will not take advantage of the Nigerian Government’s free evacuation home, he said life in Nigeria was hell and not worth experiencing twice in a lifetime.

“The question you should have asked is why I left Nigeria in the first place. I came to Ukraine two years ago. Before I did, I had stayed in Nigeria for five years after my NYSC without a job. My country psychologically abused me. I was frustrated and miserable. I almost lost hope in life. I was depressed.

“But it took me only two months to secure a good job when I came to Ukraine in early 2020. If not for this senseless war, life was beginning to have meaning for me once again.

“So, if I hop into the plane because I have seen a free flight, what happens after I come down in Abuja or Lagos or wherever? Has anything changed in Nigeria? Will I now get the job, lack of which forced me out?

“I am not coming back. This war will end one day. But if it doesn’t, we will decide what next to do. But coming back to Nigeria is out of it for now. And mind you, I am not the only one staying put. The students who were sent here by their rich parents to study may go home, but I doubt if any economic migrant like me will dare do that,” he concluded.

Meanwhile, the third batch of more than 400 Nigerians, who fled the ongoing war in Ukraine following the Russian invasion, returned back to the country on Saturday morning.

The first set arrived on Friday at the Nnamdi Azikiwe International Airport Abuja aboard a Max Air flight.

The returnees, most of them students, arrived shortly after 6:30am on a chartered Max Air flight from Romania’s capital Bucharest, one of the hubs from where African governments are scrambling to extract stranded citizens