Primate Ayodele said the cabals would frustrate the PDP’s National Chairman, Iyorchia Ayu, but he would try to set the party on the right path. 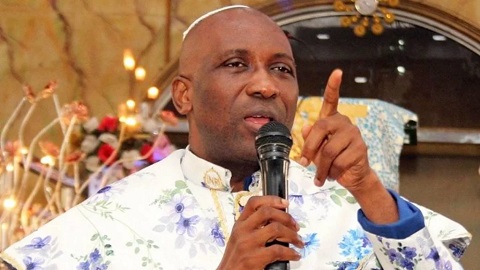 The Leader of INRI Evangelical Spiritual Church, Primate Elijah Ayodele has revealed the revelation God showed him concerning the main opposition party, the Peoples Democratic Party.
Ayodele warned that the some cabals and state governors in the Peoples Democratic Party, PDP, will break the party.
Primate Ayodele said the cabals would frustrate the PDP’s National Chairman, Iyorchia Ayu, but he would try to set the party on the right path.
He disclosed that the cabal would blackmail Ayu and try to reduce him to “nothing” as they did to his predecessor, Uche Secondus.
A statement by his Media Aide, Oluwatosin Osho, reads: “Some governors want to break the PDP, the party must be careful of the faction because it will lead the party to loss. There are cabals in the PDP too and they will lead the party to a crisis.
“The national chairman will want to make efforts but the cabals will frustrate him. They will blackmail him and want to reduce him to nothing as they did to Uche Secondus but in another dimension. They will not appreciate his efforts.”
Also, he cautioned some governors to seek God’s guidance before picking their successors.
Primate Ayodele warned that picking the wrong successor would lead to betrayal.
He listed the governors to include Nyesom Wike of Rivers State, Ifeanyi Okowa of Delta State, Ifeanyi Ugwuanyi of Enugu State.
“The following governors must be careful in picking their successors; Nyesom Wike, Ifeanyi Okowa, Ifeanyi Ugwuanyi, if they don’t seek the face of God, they will be betrayed.”
Top Stories