In a motion sponsored by Senator Thompson Sekibo (Rivers East), he described the judgment as a threat to the “legitimate functions” of the National Assembly. 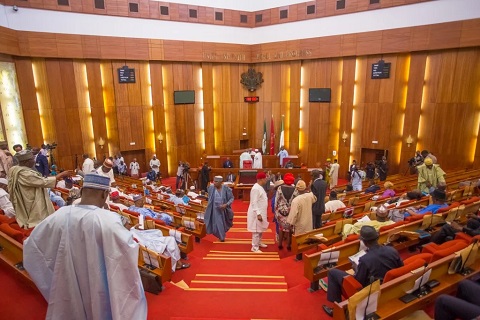 A senator has warned the Upper Chamber of the National Assembly that if it fails to challenge the order of the Federal High Court sitting in Umuahia, which recently nullified the provisions of Section 84 (12) of the Electoral Act, this may result in future crisis.
Senator Thompson Sekibo (Rivers East) in a motion he sponsored, described the judgment as a threat to the “legitimate functions” of the National Assembly.
The motion which got the support of 78 others Senators, cautioned that if the judgment if left unchallenged, “it will become a precedence on which any person approach the court and obtain judgment to ridicule the good intentions of the National Assembly as an institution.”
The lawmakers also criticised the non-involvement of the Senate in the suit, emphasizing the need for the Senate to “show concern on the judgment especially when it was not given opportunity to represent itself in a matter that emanates from her legitimate functions.”
Senator Sekibo said beyond laying a precedence for any person to use the court to ridicule the good intentions of the National Assembly as an institution; noted that the law “was widely appreciated by the citizens of the country.”
Citing the sections of the 1999 Constitution relied upon by the Court in reaching the judgment, the motion explained that Sections 228 (a, b and d) of the Constitution “confers more powers on the National Assembly, particularly on political parties and effective management of the electoral process by the Independent National Electoral Commission (INEC).”
It further added that the meanings given to ‘civil service’ and ‘public service’ by Part IV of the Constitution is unambiguous, calling on the Court to set aside the judgment as it was reached “without due consideration of the Constitutional interpretation in Section 318 of the 1999 Constitution as amended.”
Recall that Justice Evelyn Anyadike of the Federal High Court sitting in Umuahia recently declared as null, void, illegal and unconstitutional, Section 84 (12) of the Electoral Act, 2022 as amended; and asked the Attorney General of the Federation (AGF) and Minister of Justice to expunge the affected section from the Electoral Act, 2022, as amended
Top Stories