Nigerian Customs Intercepts 39,000 Litres Of Petrol In Creeks Along Border With Benin Republic


In a statement signed on Saturday by the spokesman of the command, Hussaini Abdullahi, the seized petroleum products had a duty paid value of N12,543,960.00 only. 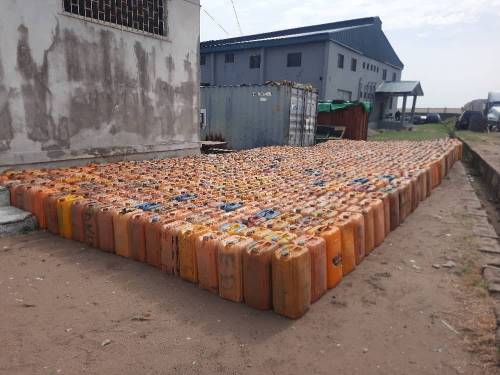 According to a report by SaharaReporters, the Seme Customs Command of the Nigeria Customs Service on Saturday revealed that its officers had intercepted and seized 39,000 litres of Premium Motor Spirit concealed in 1,300 Jerry cans along the various creeks around Badagry and Seme border areas of the country.

In a statement signed on Saturday by the spokesman of the command, Hussaini Abdullahi, the seized petroleum products had a duty paid value of N12,543,960.00 only.

The statement reads, “The continuous offensive patrol against the smuggling of petroleum products along the creeks within the Seme and Badagry axis by officers and men of the command has recorded yet another massive seizure of the product.

“The arrest was made on Wednesday, 6 April 2022. The findings revealed that 1,300 jerry cans of petroleum products in 30 litres each, equivalent to 39,000 litres, were discovered packaged in sacks along the creeks. The aforementioned item has a Duty Paid Value of N12,543,960.00 only.

“This arrest is coming at a time when the Federal Government is spending huge resources to subsidise the products to ameliorate the plight of its citizens, but these unscrupulous and unpatriotic elements are bent on sabotaging the efforts of the government. It is on this premise that the officers and men of the command, redoubled their efforts with renewed vigor in the fight against smuggling of the petroleum product.

“Accordingly, the Customs Area Controller, Comptroller Bello Mohammed Jibo attributed the successes recorded to consistency on the part of the Management of the Nigeria Customs Service in providing the needed logistics, adequate working tools, support and ensuring hard working officers are recognised and rewarded most especially through promotions.

“The CAC affirmed that the continuous monitoring and surveillance of the border axis had contributed in suppressing such illegal activities and sent the right signal to people involved in such unfortunate acts of smuggling to desist and face lawful businesses along the border axis.

“The command remains committed to ensuring such illegal and unlawful businesses are suppressed and discouraged at our borders.”