Akaolisa who confirmed the attack wondered what the grievance against him and his father were all about. 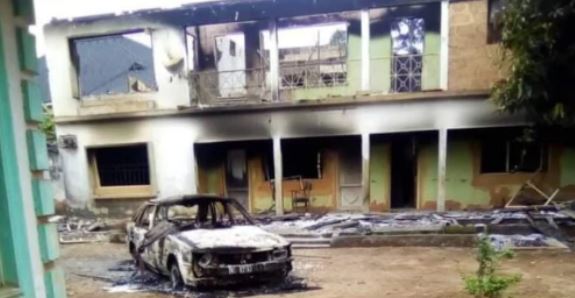 The residence of Cyprian Akaolisa who is the Commissioner for Justice and the Attorney General of Imo State has been set ablaze by gunmen.

Akaolisa who confirmed the attack wondered what the grievance against him and his father were all about.

He said in a statement;

“The Igbos are hardworking people who through their years of toils put up structures and leave developmental strides in their communities of Origin maka “ak? ruo ?l?, a mara onye nwe ya.”

“Through my many years of struggle, I have managed to put a block on another to build a befitting house for my family. My aged father also has a house he built through his sweats. Today, both buildings are in rubbles and ashes – our fellow Igbos burnt them.

“Firstly, last year, these arsonists burnt my country home in Obibi, Awo-Idemili, Orsu LGA of Imo State for no just cause. This year again, they returned and this time, they perfected the complete burning of even the blocks/bricks.

“And last night, to my utter consternation, they levelled my father’s house. This is a house my father built by himself – the life-toil of an aged man.

“In other words, I wish to put on record that my family house is completely destroyed. This was after they used a truck to cart all the properties: fridges TVs, bed/foams, generator sets and other household materials.

“What are my crimes, who did I offend? And what were my father’s offences? And I dare ask, where is the Igbo spirit? This is a direct affront to the ak? ruo ?l? spirit. Who will invest in Ala Igbo nay Orsu LGA today under this type of atmosphere?

“The above are acts of arson ongoing in my LGA of Orsu. The complete burning of our LGA Secretariat, the house of my colleague – Chief Prince Ford Ozumba, the Hon Commissioner, Imo State Ministry of Labour, Employment and Productivity, the house of Hon. Ekene Nnodumele, the member representing Orsu State Constituency in the Imo State House of Assembly. There are also houses of other political leaders which have been razed in my area so far.

“Other ungodly acts are the sacking and carting away of all the Police presence & armouries in Orsu LGA, the kidnapping and killing of well-to-do individuals and security operatives. This attendant scare has become a daily phenomenon in my Local Government Area.

“Today, these gunmen (Codenamed ?m? ?ma, under the guise of freedom fighters) have continued to demand huge sums of money from mourning families who wish to bury their loved ones and the likes. It is now strictly business! These gunmen have almost made a god of themselves, killing and carniballising at will, in my area but believe me, they will not succeed with our voices up and collaborative efforts.

“Where is the Igbo spirit, ?m?nne m? It is unfortunate that the majority of those who foment these troubles are not indigenous to Orsu but have garnered collaborators and enablers among the locals either through fear, persuasion, financial inducements and made to swear to devilish oaths of secrecy.

“It is time to synergize and put an end to the siege in Orsu LGA and liberate our people who are worse hit by the economic downturn occasioned by the ravaging insecurity. For the enablers and cheerers, It is time for the needed retrospect, soul-searching to interrogate the process so far by weighing the gains and loses.”