Plateau Massacre: How 106 Persons Were Killed, Over 100 Houses Burnt In One Night


A source said that while some of the victims were shot fleeing into the bush, others were killed in their homes, including old and young men. 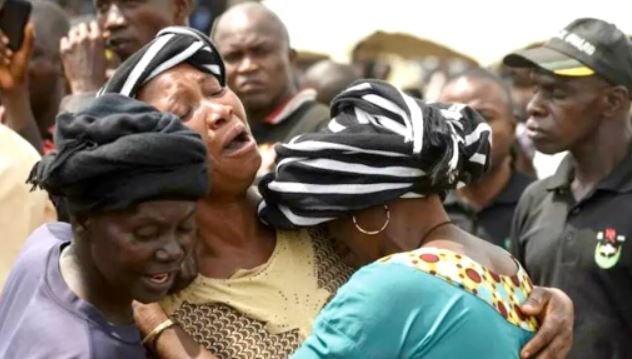 According to a report by Vanguard, some more facts, yesterday, emerged about how 106 persons were killed by bandits, who attacked about 10 communities in Kanam and Wase Local Government Areas of Plateau State on Sunday.

This came as family members of abducted passengers aboard the AK-9 train bombed by terrorists along the Abuja-Kaduna rail corridor on March 28, 2022, yesterday expressed readiness to negotiate with the terrorists to release their loved ones, if the government was not prepared to do so.

It was gathered that the bandits, who rode into the Plateau communities in over 70 motorcycles, each carrying three persons fully armed with sophisticated weapons, opened fire indiscriminately on men only, and left women unhurt.

A source told Vanguard that while some of the victims were shot fleeing into the bush, others were killed in their homes, including old and young men.

“The bandits entered the communities, one after the other, shooting directly at men and boys only; and gathered the women and girls under the trees while the operation lasted.

“At the end of the operation, they asked the women to return to their burnt homes. There was also selective burning of homes because someone, who knew the communities was the one telling them what houses to set on fire.

“Although 106 persons killed in the attack have been given mass burial, many dead bodies are still being recovered in the bushes because the bandits pursued some people into the bushes,’’ the source said.

Deputy Speaker of Plateau State House of Assembly, Saleh Yipmong, who also confirmed this, said the military and other security agents arrived in the communities an hour after the killers had left.

He said even the villagers were surprised about the attack because the communities remain the safest in the state.

Embarked on selective burning of houses

“Something that shocked everyone was that the burning of houses, over a hundred in number, was selective. Someone was telling them which houses to burn. That is why you see that a house will be burnt, the next one or two houses would be spared before they go to the next.

“The attack has created a huge humanitarian crisis in the communities now. People are homeless and are in desperate need of assistance.

Chairman of Kanam Local Government Area, where the communities are located, Dr Dayabu Garga, also confirmed that 106 victims had so far been given mass burial, adding that they were buried on Monday.

“I was present on Monday morning where we did mass burial of 106 killed and we are still picking more dead bodies in the farmlands,” he said.

He also said more than 16 people were hospitalised, having sustained gunshot wounds.

According to him, the attacks have rendered hundreds of people homeless and increased the number of Internally Displaced Persons, IDPs.

He added: “Displaced people are uncountable, more than 5,000 people are IDPs on their own soil. The issue is so much devastating.

“These people require at least protection. First and foremost, we need to have security outposts, either MOPOL or Army, because if we don’t stop who is going into the forests, definitely, there must be more attacks in the future.’’

While food items and other relief materials have been sent to the affected communities, he admitted that it was definitely not enough.

Kanam is not the only local government affected by Sunday’s attack, as there were also killings in the Wase Local Government Area, where the Deputy Speaker of the House of Representatives, Idris Wase, hails from.

In a similar development, family members of abducted passengers aboard the AK-9 train attacked by terrorists along the Abuja-Kaduna rail corridor on March 28, 2022, have expressed readiness to negotiate with the terrorists for the release of their loved ones.

They also took swipe at the Federal Government for not speaking up and for failing to act to get them about 141 missing persons out more than two weeks after the unfortunate incident.

Addressing newsmen at the National Human Rights Commission, NHRC headquarters, where they presented a letter to the Executive Secretary; the families decried what they described as the government’s insensitivity to their plight, adding that despite efforts made on their part; nothing positive had happened till date.

The spokesman of the families, Aliyu Mahmood, told journalists that have lost hope of possible government intervention; they were now ready to negotiate terms with the gunmen to secure the release of their loved ones.

“We are begging, we are pleading with the kidnappers to provide room for dialogue so that we can negotiate the release of our loved ones. We beg you to include them in your prayers and thoughts. It could have been any one of us. “All we can do is to plead with the government, plead to the world, even the terrorists and good people of the world to come to our aid in securing the release of our family members.

“We don’t have any clue on what to do. Any additional loss of life results in unbearable sorrow to the family but not to the government. We are the ones that will feel the pain of not seeing them again. We are the ones to bear the burden of knowing we could have saved them given the chance and opportunity to negotiate for the safe return of our loved ones,” the petition read in part.

Recalling the sad incident, Mahmood stated: “On March 28, 2022, the train departed Abuja and was supposed to arrive at Kaduna at 8: 40pm, but it never made it. So, this is why we are here on a very, very sad note because our family members have been abducted, scores have been injured, and some have died.

“We are here today as a group, yearning for a solution to bring our family members back home, in good health and utmost safety.”

They added that since the tragedy struck 18 days ago, the abductors only contacted the concerned families once, regretting that they were yet to call thereafter.

“We would like to bring this to the world stage that we were only contacted by the kidnappers once since the incident, and that was just to show proof of life, which unfortunately does not guarantee the health of the victims.

“No government agency reached out to us, though we have made attempts to see the right authorities, nothing came through. Everything we tried proved abortive. These are human beings that we are talking about but the response is rather discouraging and devastating.

“Our loved ones being in that perilous state for 18 days of agony in a dehumanizing state and every attempt to reach out to the kidnappers for further discussion and negotiation has proven abortive because the terrorist made it clear and explicit that the only one they will talk to is government. We are confused and most of the victims are in dire need of medical attention.”

Mahmood, who sobbed uncontrollably, added that “a seven-month-old pregnant woman, among them, has been in captivity for about two weeks now.

“Only God knows the trauma she is passing through. There is one of the victims who had a gunshot wound and needs immediate medical attention but there is no access to give him that.

“We have other people that are sick, that require daily medication; they don’t have access. There is a two-year-old (a toddler). For God’s sake, we can only imagine what they are going through. We have an aged woman of 85. She is there helplessly just like the others.

“We want to actively participate in ensuring their safety. Nothing is too small or too much to secure the lives of the victims. The longer they stay there, one cannot help but imagine the emotional, mental and physical trauma they are going through at this moment.

“The abuses they suffer can have a lasting psychological effect on them from now onward. How will that two-year-old toddler look at the world today? They have lived in unprecedented agony these past 18 days. We can’t sleep but wonder how they sleep and obviously the women among them,” he said.

A family member, Idayat Yusuf, in an emotionally laden voice urged President Muhammadu Buhari to rise to the challenge of leadership and “do something,” before it is too late.

Battling tears, she said:  “The only thing I want to say is to appeal to President Muhammadu Buhari to look at this issue as a father and husband. Some of the victims are dead. We can’t just start imagining what situation they are in.

We’re ready to negotiate with terrorists

“We are also appealing to the kidnappers to come out and negotiate with the families. We are ready, we are willing, but they are not even talking to us. We beg the government; please, they should come to the aid of these people.

“Look at the pregnant woman, seven months pregnant, no care in two weeks and she has already been given a date for caesarian section.

“Please, we are begging you, Mr President. Please come to the rescue of our family members, your citizens, children, and wives. Please, Mr President, do something.’’

Mrs Yusuf further urged President Buhari to reciprocate the mobilisation efforts she carried out for him during electioneering campaigns, saying, Mr President, Muhammadu Buhari, as one of the people that were in the forefront to campaign and mobilise for you, I am begging you to do something today.”

Responding, the Deputy Director, Civil and Political Rights, National Human Rights Commission, Haliru Adamu, expressed sympathy for the families, even as he bemoaned the security situation in the country.

The commission, he said, was working hard to make contact with relevant agencies and bodies over the tragedy.

“I will work closely with the relevant authority to ensure that the right thing is done. So, we welcome you and will sincerely take this matter seriously and will ensure that we follow it up adequately,” he assured.