17-year-old Boy Kills His Boss In Edo, Arrested While Trying to Sell The Man's Car (Photo)


The suspect was arrested with two accomplices while trying to sell his boss’ car at Uwelu Motor Spare Parts Market, Benin City. 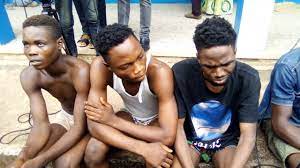 A 17-year-old teenager who killed his boss with a kitchen knife before attempting to sell his car has been arrested in Edo State.
Punch reported that Chukwuebuka Nwode killed his boss identified as Peter Onoberhie.
The suspect was arrested with two accomplices while trying to sell his boss’ car at Uwelu Motor Spare Parts Market, Benin City.
Nwode was working at a sachet water production factory owned by the deceased when he allegedly carried out the act. He was among the 11 suspects paraded for various crimes by the command on Friday in Benin City.
Briefing newsmen at the command, the Edo State Police Public Relations Officer, Kontongs Bello, said the 17-year-old boy allegedly killed the victim and conspired with two other persons to steal his car but were arrested while trying to sell the vehicle.
Narrating his story, the suspect said he used a kitchen knife to kill his boss while the deceased was watching television at midnight in his sitting room.
“I didn’t just know what came over me to kill him. I have been living with my mother in Ondo State for the past 16 years. So, when I turned 17, I decided to leave for Benin City. When I got to Benin, I first picked up a job in a bakery. After I got the bakery job, I travelled to my village but when I returned from the village, my boss said my services were no more needed.
“After I was laid off from my bakery job, I got this job. After working for some time, I decided to kill and steal his car. I went to meet him while watching television in his living room at night and stabbed him with a kitchen knife.
“In the morning, I went to Ring Road to look for a driver because I don’t know how to drive. I met someone who knows how to drive at a Bet Naija joint, took him to the house and drove the car to Uwelu Spare Parts Market to sell it for money but we were apprehended by the vigilance group who later handed us to the police.”
The PPRO stated that investigation would be done before the next line of action would be taken.
Top Stories