President Muhammadu Buhari's minister of science and technology has declared his intention to contest in the 2023 presidential election. 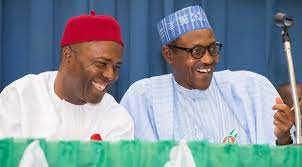 Nigeria's minister of science and technology has officially announced his decision to contest in the 2023 presidential election under the All Progressives Congress.
Ogbonnaya Onu declared on Friday an the event held at Nicon luxury Hotel, Abuja.
According to Onu, he is prepared to work with citizens to bring about progress and prosperity to the country.
He joins over 10 others who have so far declared including: Kayode Fayemi, governor of Ekiti; Adams Oshiomhole, a former governor of Edo; and Godswill Akpabio, minister of Niger Delta Affairs; Rotimi Amaechi, minister of transportation; Bola Tinubu, former Lagos governor; Vice-President Yemi Osinbajo; Dave Umahi, governor of Ebonyi; Rochas Okorocha, former governor of Imo; Yahaya Bello, governor of Kogi, and Chukwuemeka Nwajiuba, minister of state for education; Chris Ngige, minister of labour and employment; former Ogun State Governor, Ibikunle Amosun; and Pastor Tunde Bakare and others.
Top Stories