Why We Demolished Kpokpogri’s House – FCTA Speaks Up


In a phone chat with The PUNCH, an aide to the FCT Minister noted that Kpokpogri’s house was built on a major highway, hence the demolition. 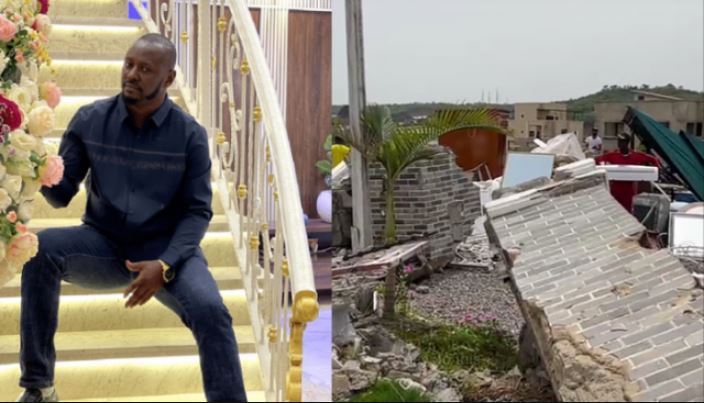 The PUNCH reports that the Federal Capital Territory Administration has revealed why a building owned by Joseph Egbri, popularly known as Kpokpogri, was demolished on Saturday morning.

Kpokpogri, an ex-lover to actress Tonto Dikeh, had on Saturday alleged that his building at Guzape worth over N700m was unlawfully demolished by the Federal Capital Development Authority without notice.

In a phone chat with our correspondent, an aide to the FCT Minister noted that Kpokpogri’s house was built on a major highway, hence the demolition.

The Senior Special Assistant to the FCT Minister on Monitoring, Inspection, and Entrustment, Attah Ikharo, noted that the building didn’t get approval from the necessary agencies.

Ikharo said, “His house is on a super highway known as M-16. He doesn’t even have a building plan approval. It’s like somebody who knows that the highway is coming sold the land to him and he just went to build. We have been asking him to stop but he refused.”

Debunking Kpokpogri’s claim, the minister’s aide noted that he was warned against building on the land but he refused.

“In Abuja, before you build, you must get building plan approval. There was no approval at all for him. The place was initially allocated to somebody long ago. So I think the person now sold it to somebody who then sold it to him,” Ikharo said.

He added, “When he discovered that it was a road, He didn’t stop but kept rushing the building. The whole building was built in less than a year.

“The Federal Housing Authority Managing Director came here twice this week. The MD came the day before yesterday (Thursday) that they didn’t give him approval and the building was illegally constructed.

“The FCDA Executive Secretary also came, adding that it was illegally constructed. We came here twice this week asking him to vacate because of the super highway.”

He added that the only impediment on the highway which began from Guzape 2 was Kpokpogri’s house, stating that in three months time, the road work will commence on the land.

Meanwhile, Kpokpogri’s ex, Dikeh, has expressed joy over the news, adding that she’ll never feel sympathy for her former lover.