The criminals were apprehended yesterday after impounding the vehicle of a motorist for changing lanes at Alausa. 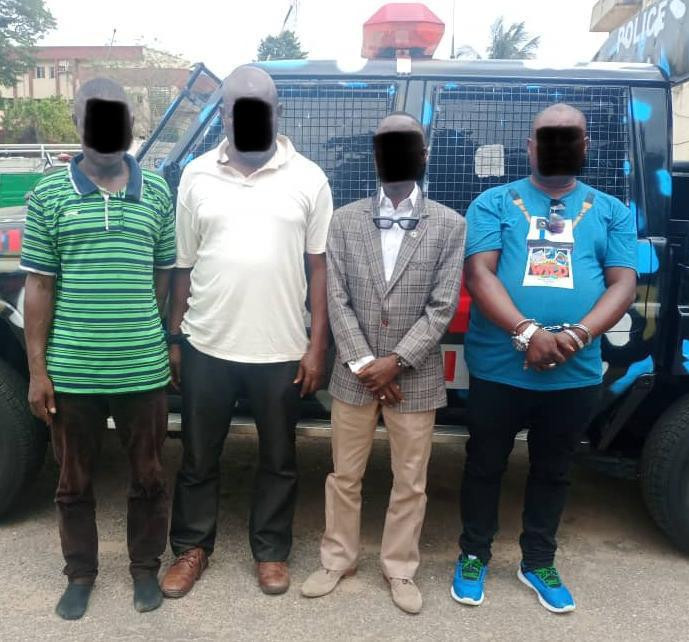 Five fake revenue collection officers have been arrested by the police in Lagos state.
According to operatives of the Rapid Response Squad (RRS), the suspects were arrested for extorting motorists in the State while posing as officials of the disbanded Lagos State Committee on the Removal of Abandoned Vehicles (RAVC).
A statement released by SP Benjamin Hundeyin, spokesperson of the Lagos state police command, gave the names of the suspects as Taiwo Falodun, aka Biggy (48), Adedire Olaniyi (42), Femi Osunkoya (53) and Olalekan Edu (51).
He said two of the suspects, Adedire and Osunkoya, were apprehended yesterday after impounding the vehicle of a motorist for changing lanes at Alausa.
''The motorist stated that the suspects took her vehicle to a park in front of Elephant Cement House, where she was asked to pay N50,000 as fine. She, however, reached out to friends who contacted the Rapid Response Squad (RRS).
The RRS arrived the scene promptly, arrested the suspects and commenced preliminary investigations. While investigation was ongoing, their leader, one Taiwo Falodun, came along with a government official, identified as Olalekan Edu to solicit the release of the arrested suspects. They were both arrested too.
RRS fingerprint records showed that Taiwo Falodun and Adedire Olaniyi were once arrested in 2020 for extorting a university professor while posing as local government officials on LASU-Igando Road.'' the statement read
Hundeyin added that the State Commissioner of Police, CP Abiodun Alabi, has directed the Commander RRS, CSP Olayinka Egbeyemi to charge the suspects to court at the conclusion of investigations.
Top Stories