The driver was said to have stopped his vehicle on noticing that he was being chased and attempted to run into the bush, but fell into a ditch and was seriously injured. 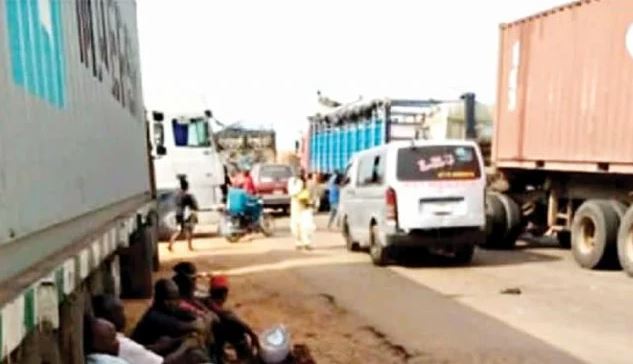 According to a report by The PUNCH, some angry tanker drivers have blocked the Abuja-Lokoja highway in protest against the reported death of one of their colleagues who ran into a ditch after refusing to stop at a military checkpoint close to the Murtala Mohammed Bridge, Jamata.

The blockade was said to have started on Monday night.

Sources claimed that the victim refused to stop when flagged down at the military checkpoint.

The driver was said to have stopped his vehicle on noticing that he was being chased and attempted to run into the bush, but fell into a ditch and was seriously injured.

He was rushed to a hospital for medical attention but later died.

His death was said to have annoyed other tanker drivers, who later blocked the highway.

The Kogi State Police Public Relations Officer, SP William Aya, said he could not confirm if the driver died.

“It is true that the driver fell into a ditch and was taken to a hospital, but I can’t say if he later died. I will find out and get back to you,” he said.

Meanwhile, the state Governor, Alhaji Yahaya Bello, on Tuesday, ordered the immediate reopening of the highway, which was blocked since Monday.

Bello gave the order in Lokoja through his Special Adviser on Security Matters, Mr Omodara Jerry.

The governor expressed sadness over the death of the driver, but condemned the action of the tanker drivers’ union, saying there were better ways of channelling their grievances.

He said the Abuja-Lokoja-Lagos highway was a critical road and its continued closure was detrimental to businesses and to the lives of the people.

Officials of the Federal Road Safety Corps and other security personnel were still battling to pacify the drivers to remove the blockade as of the time this report was filed.