The students said they are tired of staying at home as they demanded the end of the ongoing strike. 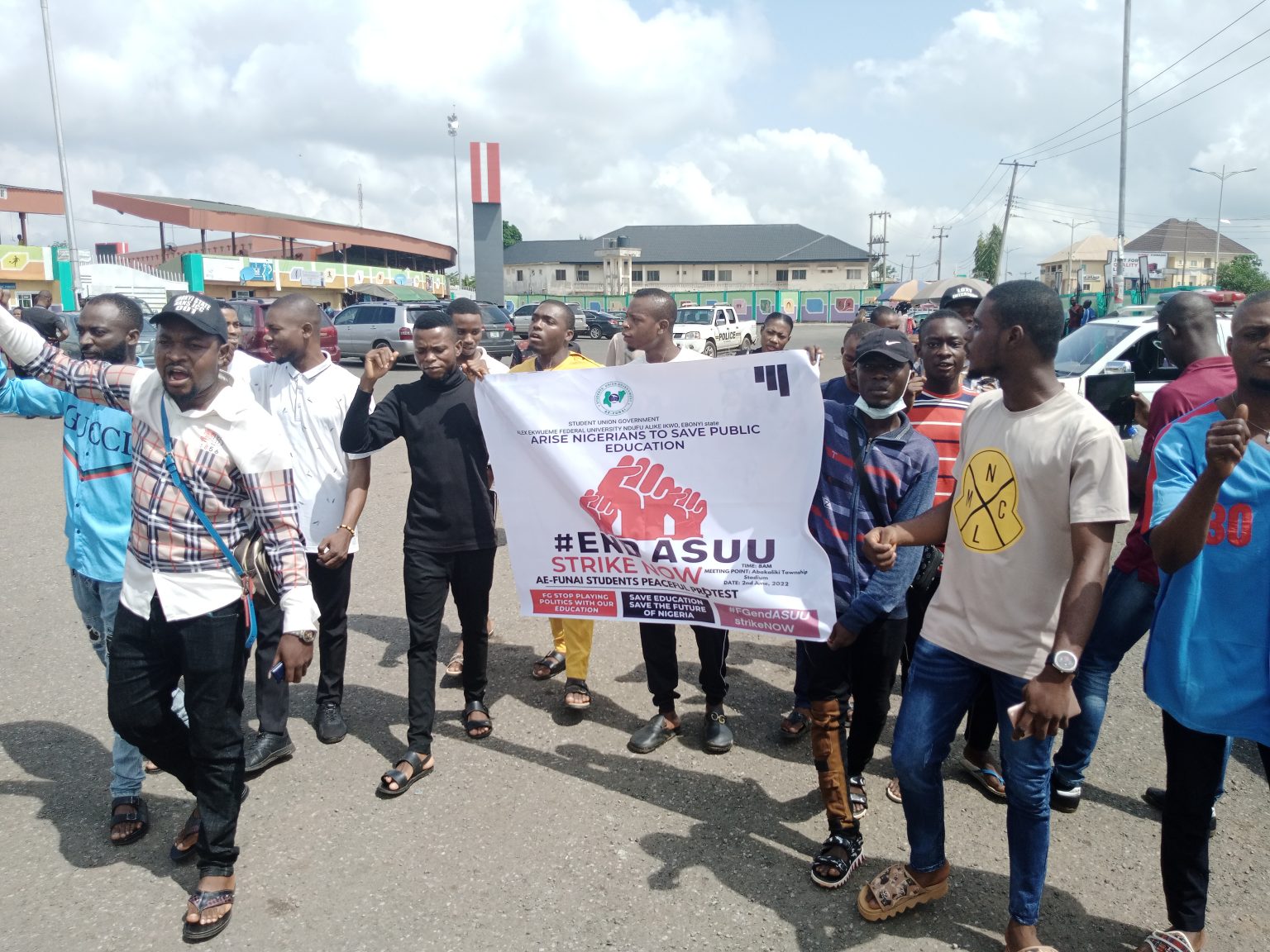 University students have given the federal government 2 weeks ultimatum to end the ongoing strike embarked by the Academic Staff Union of Universities, ASUU.
The students from various tertiary institutions in the southeast gave the ultimatum on Thursday during a protest.
According to DailyPost, the students who said they were tired of staying at home, expressed regret that many, young people like themselves have derailed from the straight path for being idle.
The females among us are now joining prostitution, while the boys have become fraudsters and yahoo yahoo businessmen.
The southeast coordinator of the students union government, zone F, Moses Ibeabuchi who spoke to journalists during the protest that took place in Abakaliki capital of Ebonyi State said, “The Nigerian government is not helping us and they are not doing anything about the strike, instead they are busy conducting primary election.
“We are tired of sitting at home. We are here at home and we can’t go to school, and we can’t do anything, they are busy trying to use us as thugs in this coming election. And we are saying no.
“We are calling on the federal government to do something because we want to go back to school. How can we do a 4 years course for eleven years, and some of the politicians are busy stealing 80billion, they should gather these monies and settle ASUU.
Also, the former coordinator of NANS South-East and South-South zones, Mr. Olisa Nwuruku Alfred, said: “We are registering our grievance over the inability of the federal government to meet the demands of the Academic Staff Union of Universities, ASUU. Students have been at home and primary elections are going on and they are preparing to conduct the general election.
“When we are in school, we will not be having a chance to join in the issues of election thuggery, kidnapping and other illegal businesses going on. And students are not happy and we are calling on all authorities including the governors of the Federation to rise up and met with the demands of ASUU” he said.
Similarly, Mr. Okeh John Kingsley, a member of NANS leadership said: “Because of ASUU strike, most of our students especially the female has joined prostitute, not only that, most of them are getting an unwarranted pregnancy while many others are forced into early marriage and they have dumped their education which is their primary purpose.
“Many of the students are the once training themselves and some of them paid house rent and it’s now expiring. Others are because of the lingering ASUU strike are now joining Yahoo Yahoo business, while others are in the street doing illegal businesses that warrant security agencies to be arresting them and we are tired of going to the police station to rescue them.
“We are ready to storm the streets after two weeks. We are giving the federal government two weeks’ ultimatum to call off the strike and if they fail, we will storm every street in the south-east region” he said
Also responding, the SUG President of Alex Ekwueme federal university Ndufu Alike Ikwo, FUNAI, Mr. Jerry Okeafor said: “We are not against the ASUU strike but we are against the federal government for not meeting up with the demands of ASUU. Because of the primary election, they have left us and have no concern about education. Politicians are busy sharing dollars to delegates but they can’t use such monies to pay ASUU so that the strike can be called off."
In a swift reaction, the special assistant to Ebonyi State government on students affairs, Mr Gideon Onwe tasked the students to comport themselves while protesting and not cause discomfort to citizens.
He assured them that the Governor of Ebonyi State, David Umahi is joining forces with other governors in the federation to find a lasting solution to the ASUU strike.
Top Stories