MASSOB stated this in statement issued in Enugu, on Friday, through its National Director of Information, Comrade Edeson Samuel. 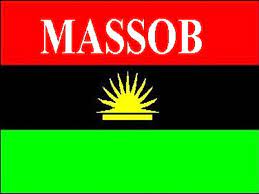 The Movement for the Actualisation of the Sovereign State of Biafra has described the Peoples Democratic Party as dead in the South East for betraying Igbos.
MASSOB said its insensitive and deliberate for the PDP to give its presidential ticket to the north and neglect people of the South-East region.
It warned the ruling All Progressives Congress not to toe the same line as it would lead to the dismemberment of Nigeria which was already on the verge of collapse.
The pro-Biafra group described the inability of the party to zone the presidential ticket to the South-East and eventual retaining it to the Northern region as great betrayal and warned that it would never be tolerated in Igboland.
MASSOB stated this in statement issued in Enugu, on Friday, through its National Director of Information, Comrade Edeson Samuel.
According to the group, “The people of the South-East and entire Igboland have been the political backbone of the Peoples Democratic Party from inception of her existence. It is a pity that our so-called Igbo political leaders and their Hausa paymasters from the PDP have betrayed Ndigbo again, we shall prove to them that the days of the PDP’s existence in the South-East are numbered.
“MASSOB, under the leadership of Comrade Uchenna Madu, declared PDP dead in Igboland. Ndigbo will never vote or support the PDP again. Our block votes and support will go to political parties that respect, uphold and protect the political, economical, academical, religious, cultural and social interests of Ndigbo in Nigeria.”
The group, however, warned the APC not to deny the South-East region their presidential ticket or they shall be banished in Igboland.
“Ndigbo shall no longer tolerate political neglect and mesmerisation; enough is enough.
“2023 would have been an opportunity to redeem and save this geographical expression called Nigeria from dismemberment by zoning the presidential tickets to the South-East region but denying the people of the region the same zoning privilege and rights that other regions have enjoyed will bring irreparable doom to Nigeria,” MASSOB stated.
Top Stories