The troops responding to the call engaged in a gun battle with the terrorists, during which six abducted victims were rescued and two terrorists were killed. 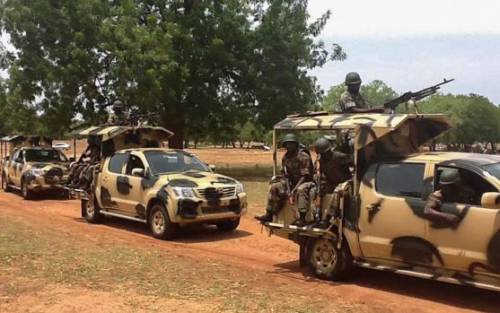 According to a report by SaharaReporters, the authorities of the Nigerian Army have confirmed that troops killed six terrorists and arrested a Boko Haram logistics supplier and a gun dealer who collaborates with the insurgents.

The spokesperson for the Defence Headquarters, Major General Bernard Onyeuko, in a statement said that troops of Operation Hadarin Daji received distress calls of terrorists’ activities in Rafin Dankura in the Bakura Local Government Area of Zamfara State where they kidnapped some members of the community.

The troops responding to the call engaged in a gun battle with the terrorists, during which six abducted victims were rescued and two terrorists were killed.

The Army spokesperson said on Tuesday, in another response to a distress call on terrorist activities at Maigora in the Faskari Local Government Area of Katsina state, the troops killed two terrorists during a gun battle.

Also, Onyeuko disclosed that troops of Operation Whirl Stroke on Monday arrested a notorious gun runner identified as Ardo Manu Andulrahaman Maranewo who had been on the wanted list.

Maranewo was said to specialise in selling and leasing arms to bandits and kidnappers in Taraba State.

In another development, troops of 151 Battalion of Operation Hadin Kai in conjunction with the CJTF on clearance patrol on Monday encountered terrorists along the Bama-Pulka Road, during which two of the terrorists were killed while two locally-made guns and ammunition were recovered.

Onyeuke also stated that troops at the Tashangoto area on Monday arrested a Boko Haram terrorist identified as Mallam Modu Rija, and recovered one AK-47 rifle, 1×36 hand grenade and 26 rounds of 7.62mm ammunition from him.

While on Tuesday, troops arrested a Boko Haram member identified as Mallam Abacha Usman at Benishek and a logistics supplier for terrorists, Mallam Ibrahim Gira along the Dambua-Biu Road in Borno State.