See The Bull Arrested In Kenya For Killing A Woman (Photo)


The owner of the bull was also arrested and is currently in custody as police carry out investigations into the incident. 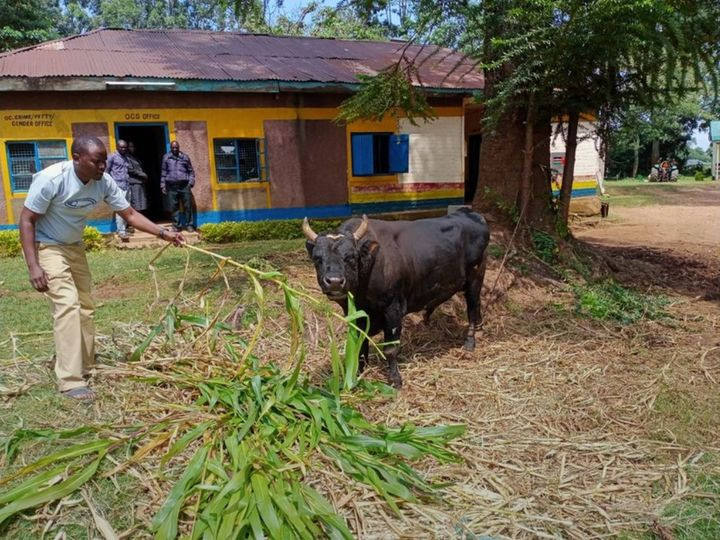 Police in Kenya have arrested a bull for killing a woman.
The bull is now being detained at the Khayega police post in Kakamega County, Kenya.
The owner of the bull was also arrested and is currently in custody as police carry out investigations into the incident.
The bull nicknamed 'Tusker' reportedly broke loose and charged at three women from Lutoto village and trampled one of them to death as the owner, Josphat Bilimo was driving it back home from a match last Friday.
The 60-year-old woman identified as Felistus Luda is reported to have been attacked by the bull as she attempted to flee from the scene.
Mr Bonventure Munanga, the director of the Kakamega County Bullfighting Association, who confirmed the incident on Tuesday, July 5, said the bull caught up with woman as she attempted to flee to safety.
"The woman could not run fast enough since she had sustained an injury in accident and she was unfortunately killed by the bull," said Mr Munanga.
Kakamega East sub county police commander Mr Robert Makau told Nation.Africa that police were called in to rescue the bull from villagers who wanted to slash it to death and share it's meat.
"The DCIO is handling the investigations. The owner of the bull will appear in court on Thursday to face charges related to negligence in handling the animal," said Mr Makau.
Mr Munanga said the owner of the bull tried to negotiate with the family of the woman so that they could settle the matter out of court.
"He agreed to meet the burial expenses, but villagers were planning to attack the bull and kill it as dictated by tradition. The bull is supposed to be killed and the meat shared out to be eaten," said Mr Munanga.
The incident has brought to light the issue of safety relating to the popular bullfighting spot which draws huge crowds in western region.
Mr Munanga said he had convened a meeting with the owners of bulls to discuss safety during bullfighting matches  in Kakamega County.
Top Stories