Lagos PDP Publicity Secretary, Mr Hakeem Amode stated that the Adediran is yet to announce his running mate. 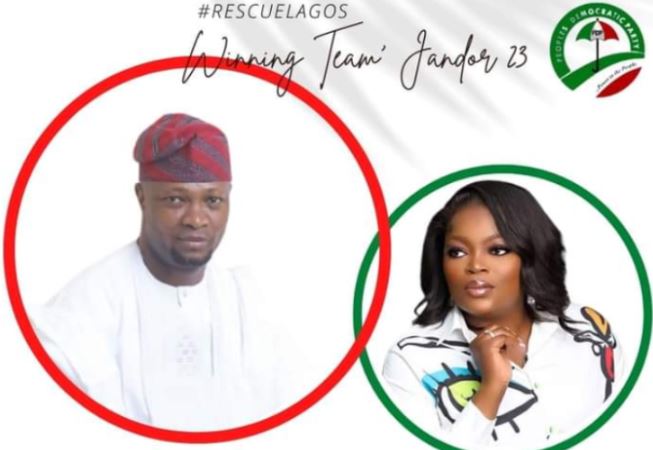 The Lagos State chapter of the Peoples Democratic Party (PDP) has debunked reports that Nollywood actress, Funke Akindele is the running mate of its governorship candidate, Olajide Adediran a.k.a Jandor.

Lagos PDP Publicity Secretary, Mr Hakeem Amode stated that the Adediran is yet to announce his running mate.

Amode added that the candidate will soon announce his running mate and everybody will know.

“It is not in my place to announce who the running mate to our governorship candidate, Jandor, is. Let us wait for the candidate himself to announce.

“Has the candidate of the party announced anywhere that he has picked his running mate?

“What you are reading online on this, is it from the candidate of the party?

“The candidate of the party will announce who his running mate is and he has not done that. We should wait for the official announcement.

“He will do that in no time and you all will hear. I will not confirm anything, the candidate of the party will do so.”

“No, what you will see is that she has been nominated (alongside four others). Nobody has been chosen officially.

“They are just trying to jump the gun, maybe because of one or two activities within the party.”