The crocodile attacked the boy identified as Antar Singh, when he was taking a bath in the Chambal river on Monday morning, July 11, and dragged him into the river. 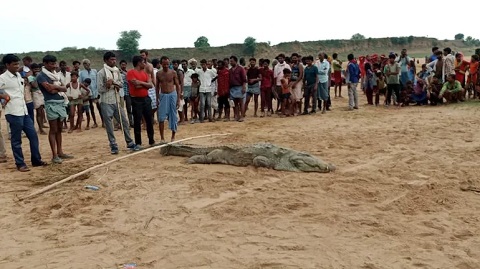 A crocodile that attacked and reportedly swallowed a seven-year-old boy has been captured in india.
Angry villagers in Raghunathpur village, Madhya Pradesh's Sheopur district, India captured the crocodile with the intention of slithing its stomach open to retrieve the seven-year-old boy it swallowed alive.
The crocodile attacked the boy identified as Antar Singh, when he was taking a bath in the Chambal river on Monday morning, July 11, and dragged him into the river.
The locals present on the site called his family and relatives immediately and caught the crocodile with the help of sticks, rope and a net. They dragged the crocodile out of the river.
Senior police and forest officers reached the spot and stopped them from killing the large semi-aquatic reptile. They convinced them to search for the boy in Chambal.
"Therefore, they captured and tied it besides thrusting a bamboo between its jaws to ensure that it didn't chew up the boy," said locals.
Devastated family even shouted the name ‘Antar Singh’ in hope of the boy still being alive as the crocodile was hauled ashore in the net.
They kept forcing forest officials to surgically recover the boy from its stomach and refused to release the crocodile till then. Hundreds of people had gathered around the spot.
Meanwhile, the SDRF team was also engaged in searching for a child in the Chambal River. The rescue team continued the search operation till late evening, but nothing was found.
Searches stopped after dusk. Officials told villagers that if the crocodile had snatched the child, it would not swallow.
Police say that the boy must have gone into the deeper side of the river. Searches would resume on Tuesday.
Villagers said that this crocodile has become a man-eater and should be released in any far away place.
According to officers, there are hundreds of crocodiles in the river and there have been several instances of attacks on humans. Sheopur is going to become a new home for the first batch of Cheetahs being translocated from South Africa and Namibia.
Some of the villagers claimed that they had seen a crocodile swallowing the boy alive.
Watch video below:
Top Stories