They were accused of aiding politicians to hoard Continuous Voter Registration (CVR) in Oniru, Lagos. 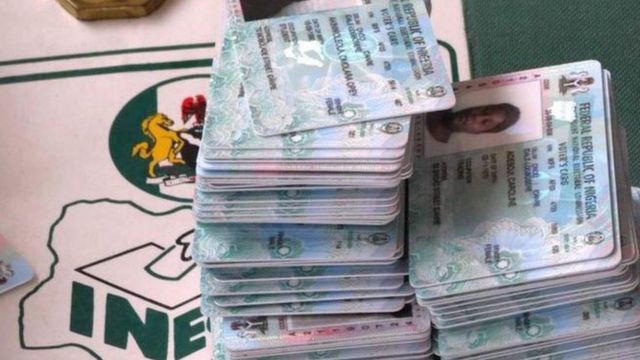 The Independent National Electoral Commission (INEC) staff have been slammed with a new accusation.

They were accused of aiding politicians to hoard Continuous Voter Registration (CVR) in Oniru, Lagos.

Citizens who tried to apply for their Permanent Voter’s Card (PVC) at the New Market area narrated their experience to DAILY POST on Friday.

One of them, Simon, lamented that dozens of people were left stranded because they could not submit their personal data.

The youth said at the venue, he met a crowd grumbling and engaged in conversations to find out the situation.

“On Thursday, we heard that “signed forms” were shared on Wednesday which was declared no-market day. The INEC people didn’t come that Wednesday.”

Simon, a company supervisor, said upon enquiry, they were told that a certain councillor in the Oniru area signed the forms.

“We tried to speak with the INEC staff but they did not respond, saying they were busy. We later discovered that the forms for new registrants were with somebody”, he said.

Another complainant, who spoke on condition of anonymity, disclosed that the individual was identified by residents.

“We approached him but he kept insisting the forms would not be released without the consent of a councillor. He was only giving them out after profiling.

“At one point, the atmosphere got charged; people ran after him and were shouting that the papers are federal government property.”

The aggrieved applicant noted that many were disappointed, wondering why a person not working for INEC was in possession of the forms.

However, the processes for the replacement of damaged/lost voter’s card, correction of details, and application for transfer of location were not complicated, the source added.

On Saturday, INEC’s Public Relations Officer in Lagos, Adenike Oriowo said the commission would need evidence of the complaints.

“The people can make a video, we need it for evidence. It will also be useful if they can get the person’s name”, she told DAILY POST.

There have been disturbances at some CVR centres in different locations across the state, with non-indigenes raising allegations of a disenfranchisement plot.

On Friday, disruption occurred at St. Bridget Catholic Church in ljesha, Surulere, as thugs carted away enrollment machines, according to eyewitnesses in a trending video.

Speaking to the News Agency of Nigeria (NAN), Oriowo stated that no machine was stolen and though there were issues, orderliness was restored.

INEC postponed the CVR registration deadline from June 30 to July 31 after a judgement delivered by the Federal High Court in Abuja.

The judge dismissed the suit by the Socio-Economic Rights and Accountability Project (SERAP) seeking an extension beyond the end of last month.

The court affirmed that INEC is at liberty to suspend the exercise, provided it is not later than 90 days before the date fixed for a general election as provided in Section 9(6) of the Electoral Act 2022.