Galadima made this known while appearing on a TV program on Tuesday. 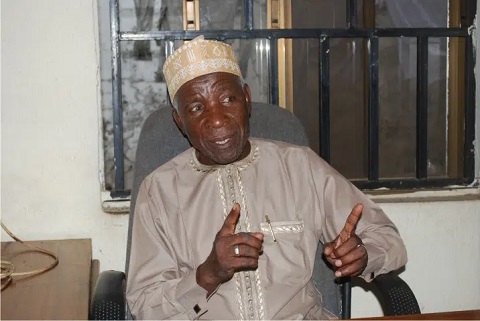 A chieftain of the New Nigeria People’s Party (NNPP), Buba Galadima has boasted that the presidential candidate of the party, Rabiu Kwankwaso will win the 2023 election.
Galadima, a former ally of President Muhammadu Buhari added that only God can stop Kwankwaso from becoming President.
Galadima made this known while appearing on a TV program on Tuesday.
He said that all the permutations have suggested that Kwankwaso will be the president.
Relying to questions regarding the party’s hold in the Southern region of the country, Galadima maintained that it is under control, adding that its presidential candidate recently visited Lagos and the crowd who came out to welcome him was overwhelming.
Meanwhile, the NNPP presidential candidate, Rabiu Kwankwaso and his running mate, Bishop Isaac Idahosa, recently paid a visit to the Archbishop of Metropolitan and Primate of the Anglican Communion, Henry Ndukuba.
The media aide to the NNPP flagbearer, Saifullahi Hassan, made this known in a statement issued after the meeting.
According to the statement, the former Governor of Kano State and ex-Minister of Defence was accompanied by President/CEO, IykeJordan Group Limited, Ikechukwu Nnahasi, Managing Director, Treasure Suites Limited; Godfrey Ejim; and former and serving members of the House of Representatives, including Kawu Sumaila, Alhassan Rurum, Badamasi Ayuba and many others.
Top Stories