Usyk defeated Joshua in the first bout with a clear unanimous decision win, and Joshua is more than aware of the challenges that the rematch will pose. 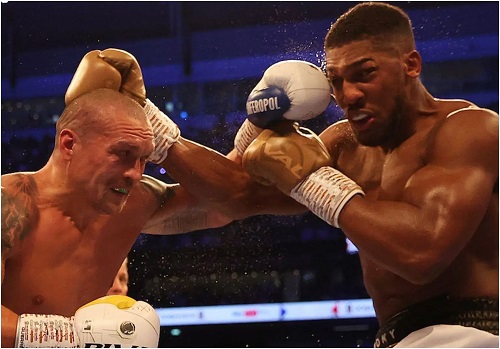 British heavyweight boxer, Anthony Joshua has revealed his plan if he loses against Ukraine's Oleksandr Usyk on Saturday night.
Recall that the rematch will take place this weekend.
Joshua, who will be hoping to reclaim his WBA, WBO, and IBF belts he lost to the unified heavyweight champion last September in London, insists that he will carry on fighting even if he fails to retrieve his world heavyweight titles from the Ukrainian.
‘I respect people’s opinion,’ said the 32-year-old. ‘But I don’t want to retire.
I’ve got one of the biggest fights of my life coming up and if you were thinking about retiring, it would put massive doubt in your mind.
‘People will always ask the question but I still want to continue. I love it.
'If I was losing to some has-been, then yes. But it’s crazy to talk about retiring because I lost to one of the best fighters in the world. What sort of nonsense is that?’
Usyk defeated Joshua in the first bout with a clear unanimous decision win, and Joshua is more than aware of the challenges that the rematch will pose.
Speaking at Wednesday's press conference ahead of the fight, the 32-year-old said: 'It’s tough, but I’m relishing the challenge. Let’s get the job done, instinct, stay focused and god willing, I’ll be victorious.
'I have goals that I want to achieve on the night, and I need to be disciplined to follow through. It’s competition with myself. The belts mean something, but that’s at the end of the target.
'I’ll focus on the process first and foremost. I want to compete. I have a competitive spirit.'
Top Stories