CSGO weapon cases are items that contain non-standard weapons or stickers that differ from ordinary weapons only in appearance. 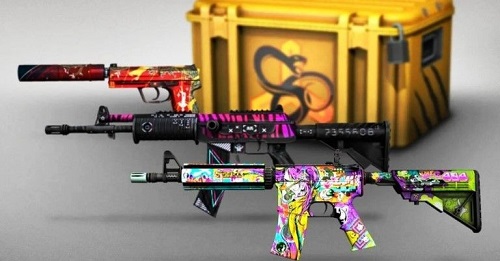 During online battles with other players, you should have noticed that many use non-standard weapons that have colors or stickers. And you probably wondered where such a pistol or machine gun can be obtained. Today we will tell you how to do this by opening CSGO weapon cases and making deals on the trading platform.
What are they needed for?
CSGO weapon cases are items that contain non-standard weapons or stickers that differ from ordinary weapons only in appearance. It looks impressive, but, in fact, it does not give any bonuses. In gaming slang, it is called "skin" – this term is used by all players.
Each series of chests has a name, and inside there is a certain set of skins. One of them can be obtained by opening the box with a special key. When you hover over a chest that is in your inventory, a list with the skins that are in it is displayed.
How to get and open?
To get a cool gun, you need two things: a case and a key that matches it. First, you need to decide how you will have a chest. There are the following options to choose from:
To open the chest, you need a key from the same collection. For example, if you have a Gamm 2 case, then you must have a Gamma 2 key to open it. The key can be purchased at the marketplace or received as a gift from another person. The price of the keys on the site is about 3 dollars.
To open a chest, you need to right-click on it and select "open". Then you will get one skin from the set, and the case and key will disappear.
A few life hacks
We have prepared several life hacks that will help you save some money and save your nerves.
Case opening is a lottery worth playing only for very expensive skins like knives. The chance of winning a knife is less than 1 percent. You may get it the first time, or you may never get it.
Do not open chests unless you intend to win a knife. As a rule, the cost of the case and key is higher than skins from the box. So, you are just wasting your money.
After the release of the new collection, boxes and weapons from them are very expensive. But, as we have already said, after a while, prices drop several times. Therefore, if you do not chase the fashion, then wait until the price drops to an acceptable level, and only then buy.
Do not use third-party services that promise a 100% chance of winning expensive items. These are scammers who seek to gain access to your account. Steam itself does not provide such an opportunity, otherwise, all players would have the highest quality items.
The Steam marketplace opens up great opportunities for every player even in situations with cases. But before you try to open a case, first think very carefully, because your investment may not pay off.
Top Stories