From Mobile Screens To TV: Check Out The Nigerian Skit Makers Who Have Joined Nollywood


While their fans laughed and giggled at the skits they watched on their ‘small screens’, these humour merchant had their eyes on the big screen. 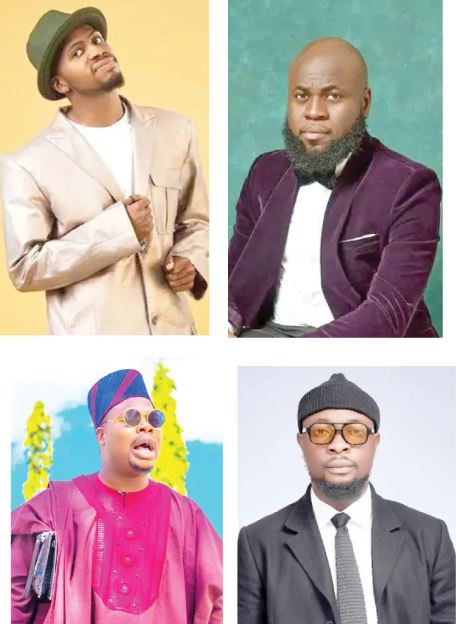 For these Nigerian talents, their journey to stardom began on mobile devices as they churned out skits to the delight of their fans.

While their fans laughed and giggled at the skits they watched on their ‘small screens’, these humour merchant had their eyes on the big screen.

Daily Trust Saturday shines its spotlight on some popular Nigerian skit makers who have found their way to the mainstream film industry popularly known as Nollywood.

Unknown to some of his fans, the humour merchant known as Broda Shaggi was christened Samuel Animashaun Perry. Born in 1993, the skit maker is also a songwriter and musician. He is a native of Ishagamu in Ogun State but he was born in Ikene, Ogun State.

Acting seems to be in his genes as his late father was a drama instructor at Junior School Ikene, Ogun State. The popular online comedian studied Creative Arts at the University of Lagos.

He began comedy while in university. Before his character, Broda Shaggi, became popular, he had created other ones.

Perry has various awards under his belt like, The Future Awards Africa Nigeria Prize for Comedy and City People Music Award for Comedy Act of the Year.

Born Debo Adedayo on May 3, 1993, the young Nigerian who is well known as a comic skit maker is carving a niche for himself in the Nigerian film industry.

The character he portrays, Mr Macaroni, is best known for his Instagram comedy videos where he plays the role of a “sugar daddy”, more so, he brought the phrases “Ooin” and “You are doing well”, to the consciousness of Nigerians.

Also known as an activist, Adedayo, during the 2020 #EndSARS protests, used his platform and presence to speak against police brutality. Unknown to many, the funnyman started his entertainment career in the movie industry but when the roles were not coming his way, he switched to making skits online, a move that made him famous.

Known for making his skits with a ‘wide mouth’ disguise filter on social media, Nosa Afolabi, fondly known as Lasisi Elenu, is a comedian, actor and compere.

Lasisi Elenu, who recently proposed to his girlfriend, was in 2018 nominated for The Future Awards Africa Prize for Comedy. In March 2020, he was named one of Nigeria’s Top 25 Under-30 Nigerian Superstars.

Currently, his movie Razz Guy is airing on Netflix and is on the Top 10 Nigeria list. More so, the funnyman has featured in films like, The Ghost and the Tout – 2018; Made in Heaven; Sylva and African Messiah.

Popular internet comedian and father of one, Chibuike Josh Alfred professionally known as Josh2Funny is also an actor and musician. Josh2Funny was born in Anambra State on December 18, 1990.

He moved to Lagos with his parents when he was eight years.

He wormed his way into the hearts of humour lovers via several skits he uploaded on his social media pages, especially Instagram. However, he gained prominence when his skit #DontLeaveMe went viral with people from other countries around the world joining in the challenge.

The #DontLeaveMe challenge is basically the creative use of words.

After ‘breaking the internet’ the jokester has ventured into Nollywood and has stared in some blockbuster movies like; Money Miss Road – 2022; Knockout – 2019; and Lagos Real Fake Life – 2018.

Known as Mc Lively or Barrister Mike based on his social media comedy skits, Michael Sani Amanes was born on August 14, 1992. He has made a name for himself in Nigeria by making people laugh.

Although a native of Agenebode, Edo State, the comic relief character was born in Osun State, where he had his primary school to tertiary education.

The 30-year-old began his comedy career in 2015 but shot into the limelight through his online funny skits “Agidi” where he talked about events and real-life issues happening in Nigeria.