Okada Rider And Passenger Crushed To Death On Lagos-Ibadan Expressway


A speeding Honda Pilot car had crashed into a Bajaj Boxer motorcycle on the highway, killing the rider and his passenger. 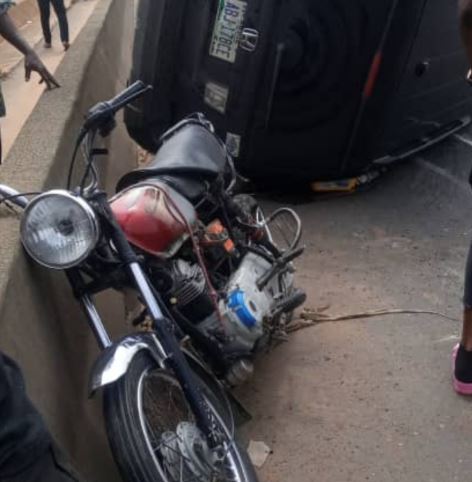 Tragedy struck as a commercial motorcyclist (Okada rider) and his passenger were crushed to death along Lagos-Ibadan Expressway on Sunday, August 21.

A speeding Honda Pilot car marked ABJ178CE had crashed into a Bajaj Boxer motorcycle with registration number AAA213QM on the highway, killing the rider and his passenger.

The spokesman of the Federal Road Safety Corp (FRSC) in Ogun State, Florence Okpe, said the accident occurred at about 10:55 am on Sunday.

Okpe said three male adults were involved in the crash. Two died and the third was unhurt.

The bodies of the deceased have been deposited at Idera Mortuary, Sagamu.

Okpe said the Sector Commander, Ahmed Umar, cautioned motorists against speed violations, just as he commiserated with the family of the victims and enjoined the relatives to contact the FRSC Sagamu for more information about the crash.