What Type Of Dressing Is This? - Nigerians Fume Over Shettima's Outfit To NBA Colloquium in Lagos (Photo)


When spotted at the event, Nigerians flayed his choice of dress. Shettima was spotted putting on, a suit and a pair of canvass. 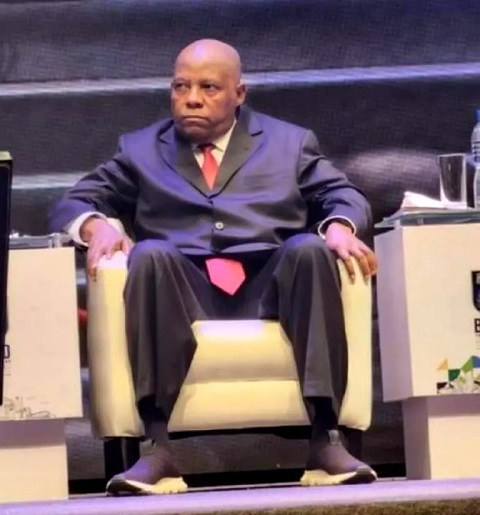 Nigerians have queried Kashim Shettima, the vice presidential candidate of the All Progressives Congress over his outfit to the the Annual General Conference of the Nigerian Bar Association, NBA.
Recall that the conference held on Monday with Peter Obi, the presidential candidate of Labour Party and Atiku Abubakar, presidential candidate of Peoples Democratic Party in attendance.
Bola Tinubu and Rabiu Kwankwaso were absent.
However, it was Shettima's dress - a suit and a pair of canvass - that got the attention of Nigerians who expressed disappointment over his choice of dressing.
Reacting, a former aide to former president Goodluck Jonathan, Pastor Reno Omokri opined: “This is Tinubu’s running mate, Senator Kashim Shettima, at the NBA Annual General Conference earlier today. Look at his feet.
“Who in his right mind wears a suit and tie and then puts on a pair of gym shoes? If Shettima does not know how to dress himself to a formal conference, how will he be able to address Nigeria’s many challenges?
“Imagine if this were the United Nations General Assembly. What will his dress sense project about Nigeria? A man who cannot package himself is very unlikely to package progress for a nation that has been damaged by the All Progressives Congress government of General Buhari! If you are a foreign investor, would you want to invest in a country where the Vice President is seen in public like this?”
Also the convener of Concerned Nigerians Groups, Deji Adeyanju, said: What is this?
Another whose name is Maiyegun’s Diary Politico said: “E be like say na around 4am this morning dem call am to dress up, he dey go Lagos to represent emilokan where lawyers dey wait for him. This is the moment he realised that it is real 😳😳🤲🏾 Thinking: “Wetin I dey here?”Where is emilokan?” 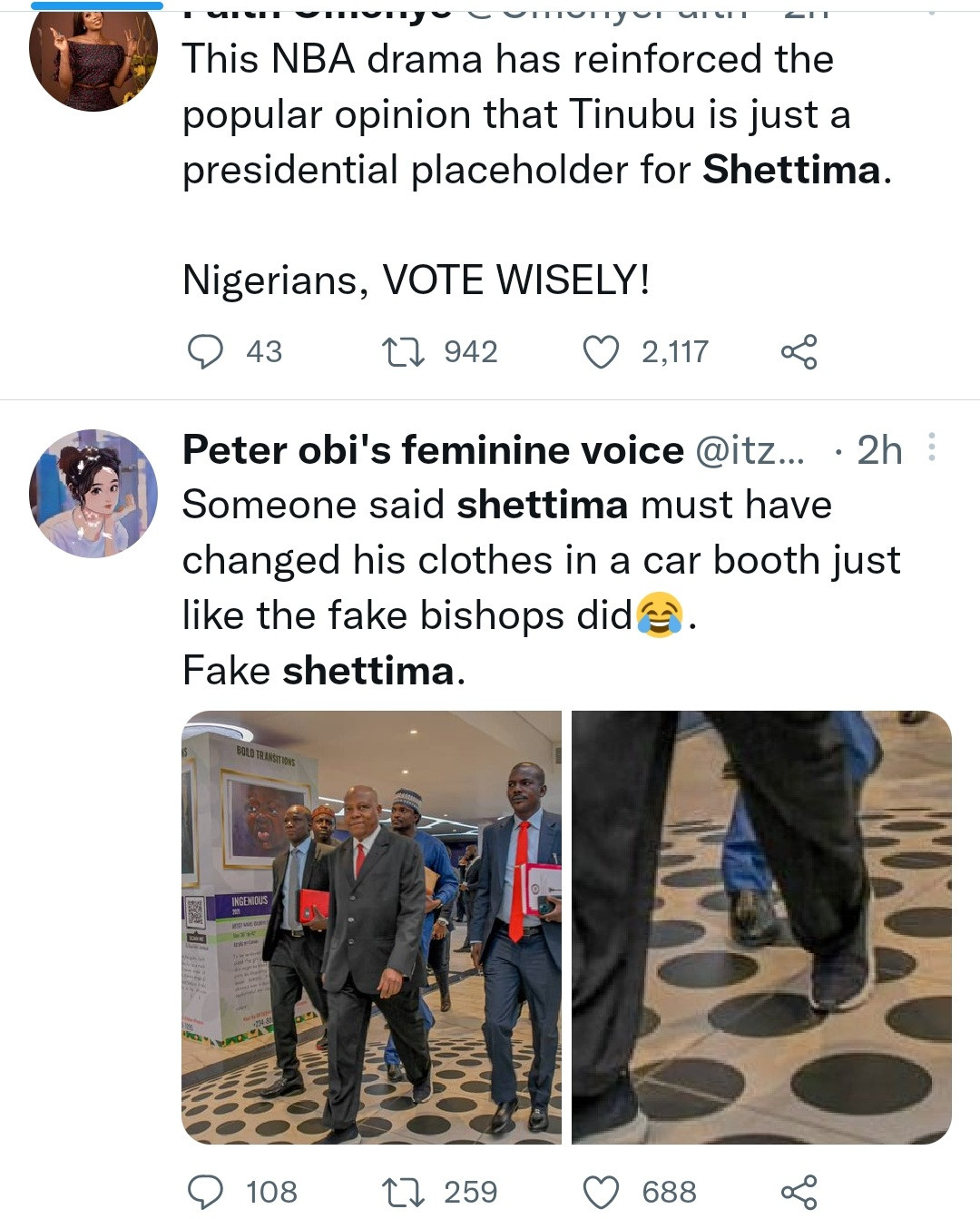 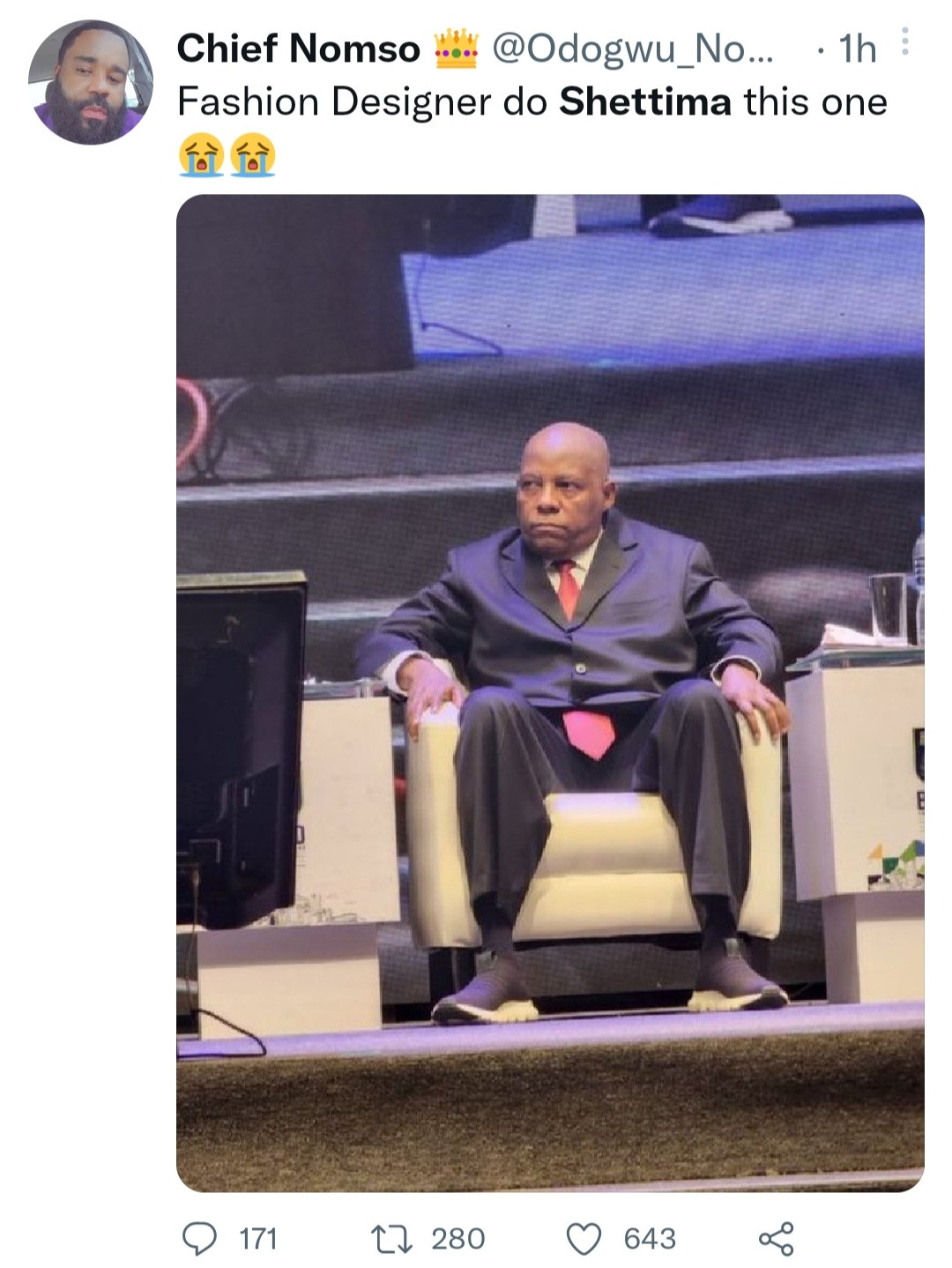 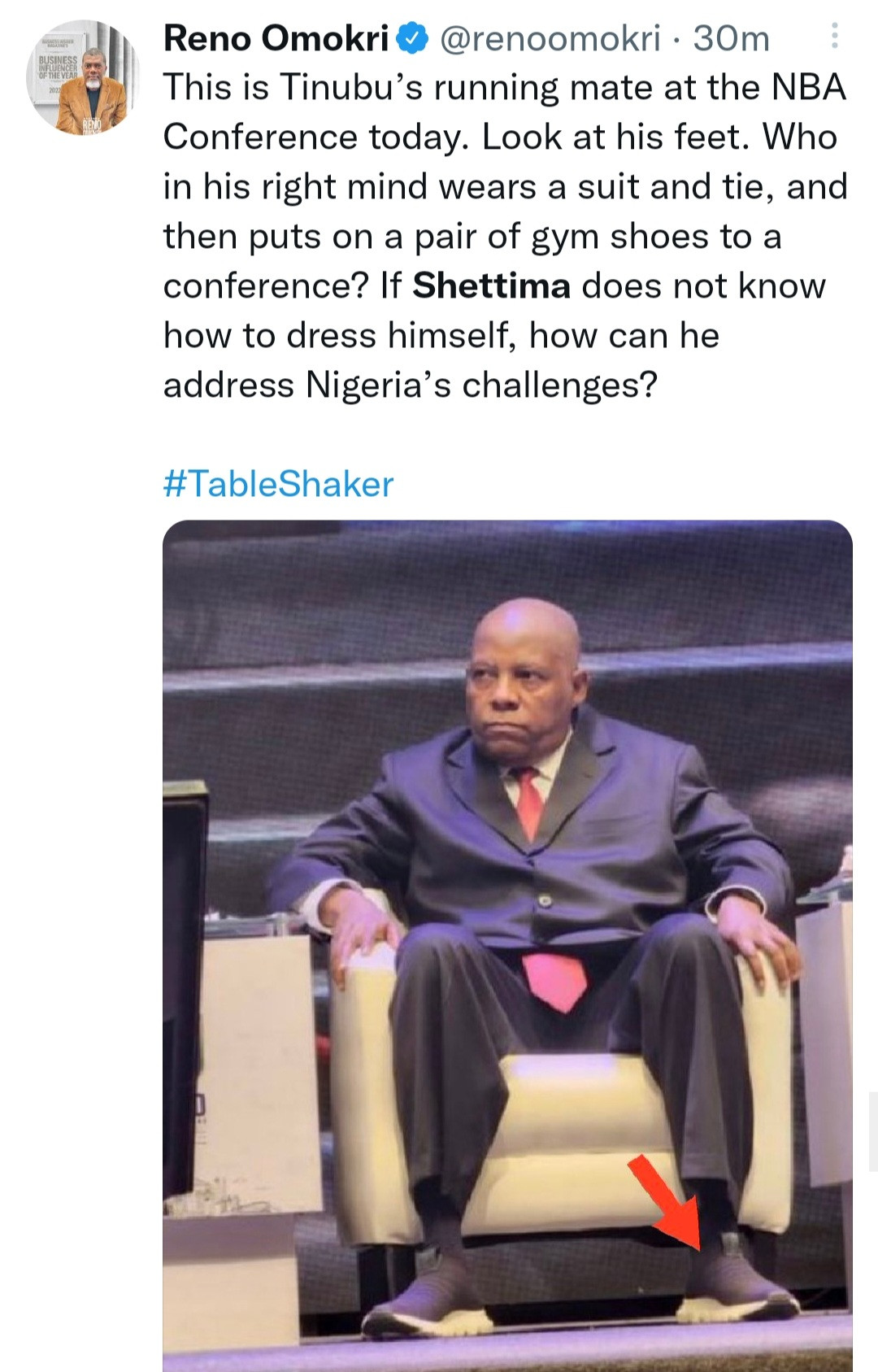 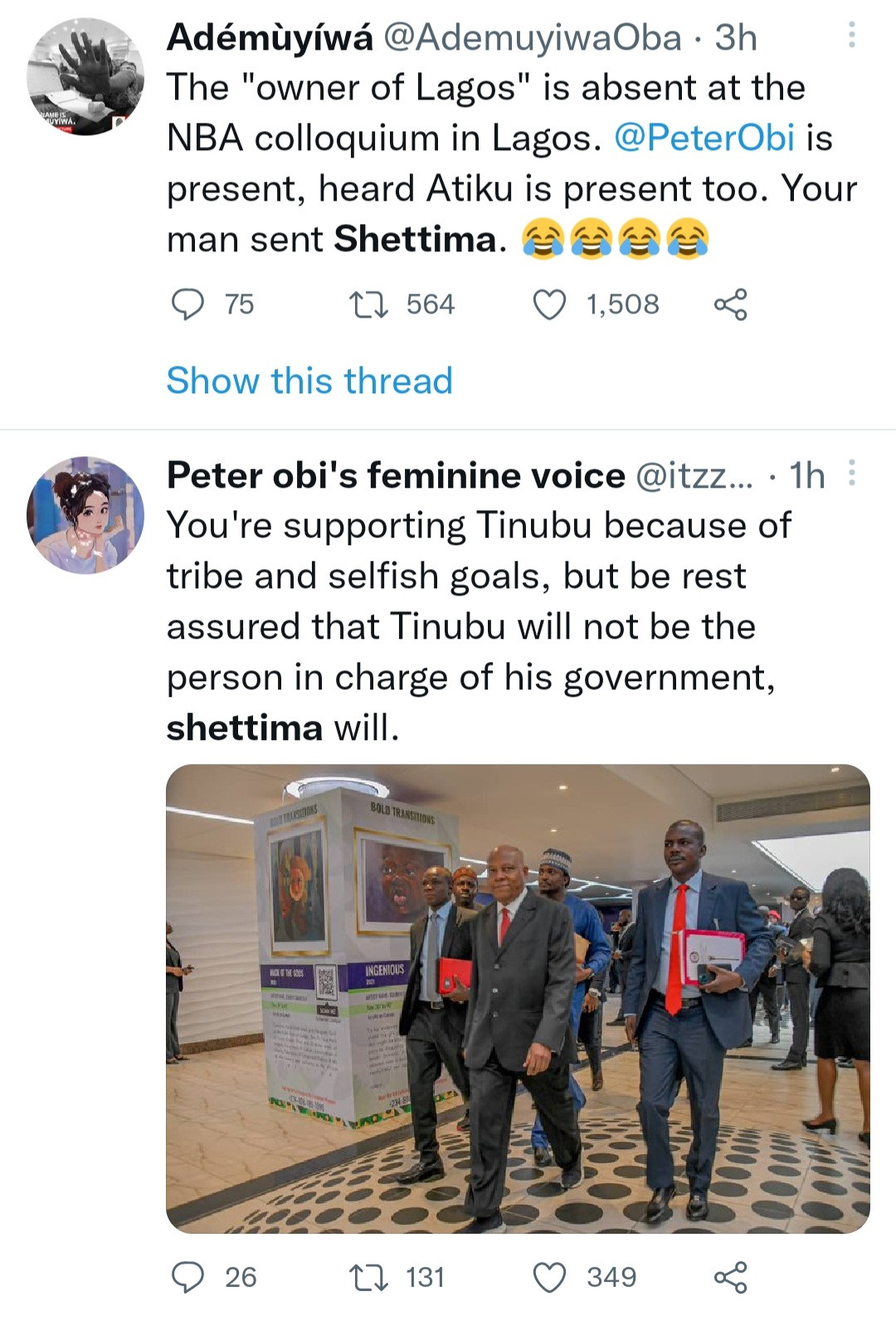 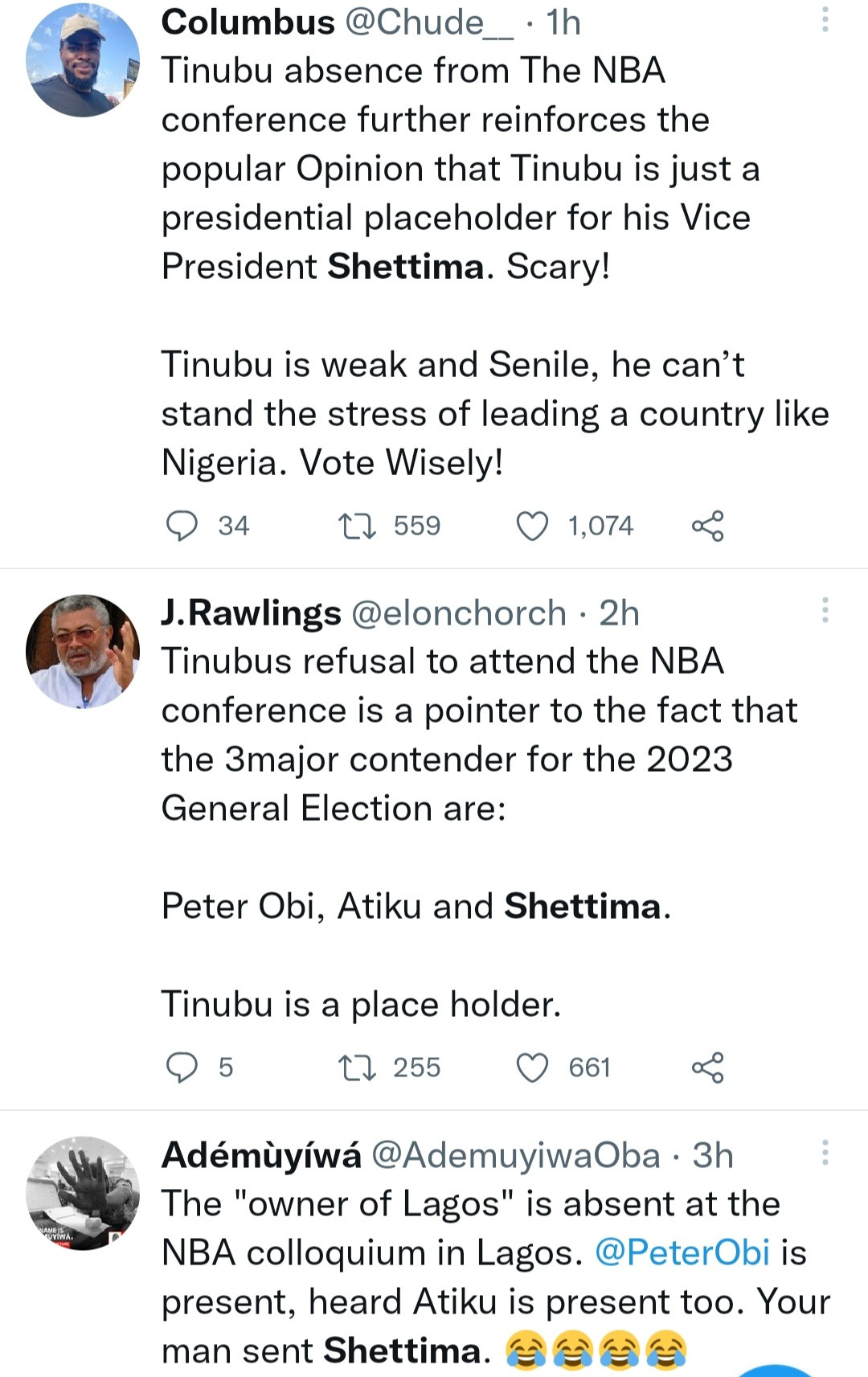