The market was said to have been illegally established by the insurgents on the outskirt of Bama. 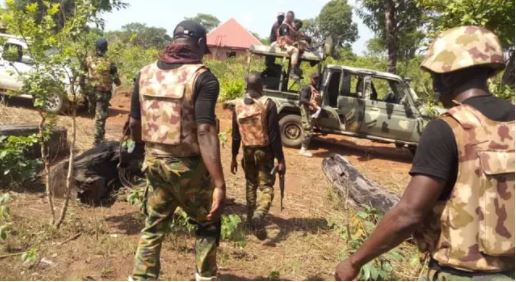 Six Boko Haram insurgents have been killed by troops of the 21 armoured brigade.

The insurgents were killed during a raid on a barter market known as Daula in Bararam, Bama LGA of Borno.

The market was said to have been illegally established by the insurgents on the outskirt of Bama.

According to Zagazola Makama, a counter-insurgency publication in the Lake Chad region, the raid took place on Wednesday around 11am when the troops in collaboration with the Civilian Joint Task Force (CJTF) stormed the market located in Bararam village.

Sources were quoted to have said transactions were going on when the troops raided the illegal market.

“They were trading in items like maize, beans, salt, maggi, used cloths, drugs, petrol to the insurgents while the insurgents would in exchange supply scrap metal,” Zagazola quoted a source.

The sources said that upon sighting the troops, the terrorists engaged the soldiers in gun battle but were swiftly overpowered and neutralised.

The troops were said to have arrested many Boko Haram’s logistics suppliers and collaborators during the raid.

Weapons were also recovered after the operation, while arrested suspects have been transferred to the brigade headquarters in Bama for investigation.

The military, in recent months, has continued to launch offensives on the Boko Haram insurgents that have terrorized the north-east region in 13 years.