NASA Explains Why It Canceled Its Mission To The Moon


The delay was in place for almost an hour but ultimately this led to the flight being canceled. 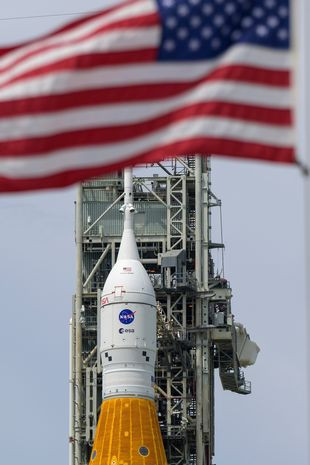 NASA has explained why it decided to cancel its mission to the Moon on Monday, August 29.
Recall that NASA was to launch its newest rocket ship that had been planned to go to the Moon on Monday, but it was canceled.
The canceling of the long-awaited Artemis-1 42-day trip is a serious blow in man's return to the Moon almost 50 years since humans last walked there.
There was some alarm Monday morning when engineers detected a hydrogen leak in the rocket. The launch then ran into further problems as they were unable to communicate between the ground teams and Orion spacecraft.
A crack was detected but later said to have posed no safety issue. However, things got even worse after issues with engine three meant that the launch clock was paused a T-minus 40 minutes.
Scientists were unable to get the engine down to the required temperature, and even after diverting further coolant through it they couldn't get it to a safe temperature.
The delay was in place for almost an hour but ultimately this led to the flight being canceled.
US space agency, NASA said: "Launch director Charlie Blackwell-Thompson has called a scrub of the attempt of the launch of Artemis 1.
"The issue that came up was an engine bleed which couldn't be remedied but the rocket is currently in a stable configuration.
"It was mostly tanked but not completely tanked.
"Engineers are now working on a plan to continue gathering data about this particular engine and the bleed that didn't work out."
Nasa added that the first opportunity for the next launch attempt will be September 2 depending on how the engine bleed develops.
The last time humans went to the moon it had been to prove that it could be done whereas the new mission is about proving people can go there for longer and more sustainably.
It will also assess whether some infrastructure can be built on and around the moon, allowing humans to survive on another planetary body.
The Artemis 1 mission would have seen the first launch of the new 322ft tall Space Launch System (SLS) rocket, which the agency says is the world’s most powerful rocket to date.
NASA Administrator, Bill Nelson, spoke to the media following the delay of Artemis 1, he said: "We don't launch until it's right. There are certain guidelines and I think it's illustrative that this is a very complicated machine and a very complicated system and all those things have to work. You don't want to light the candle until its ready to go.
"I have some personal experience on the crew I was in, we scrubbed four times on the pad and the fifth time was a flawless mission. We know had we launched on any one of those scrubs it wouldn't have been a good day.
"It's just apart of the space business, particularly a test flight. We are stressing and testing this rocket and the space craft in a way that you never would with a human crew on board. That's the purpose of a test flight. "
Top Stories