The building, which was still under construction, collapsed at Hamza Abdullahi Street Off Gado Nasco Road, at about 11:30 pm. 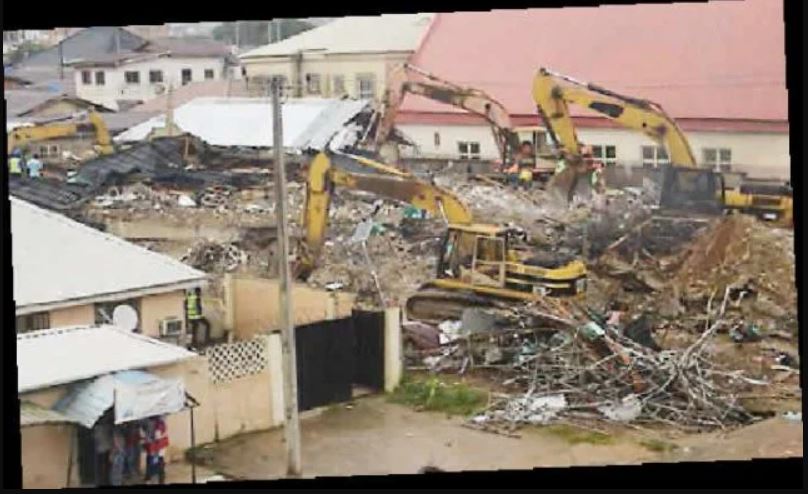 The people who were lucky to survive the building collapse in the Federal Capital Territory, Abuja, last Thursday have opened up about the horrific experience.

They are apparently yet to get over the shock and attendant ordeals provoked by the incident.

Two persons were confirmed dead and five sustained minor injuries in the incident. The building, which was still under construction, collapsed at Hamza Abdullahi Street Off Gado Nasco Road, at about 11:30 pm.

A gateman identified only as Mr Abdullahi and his visitor; one Mr Bolaji, trapped in the rubble on Thursday, were confirmed dead about 24 hours later. Abdullahi reportedly died at 6:30 pm on Friday, while Bolaji was found dead two hours after.

Five of the victims, none of whom suffered a major injury, were rescued by a joint task force of operatives of the Nigerian Security and Civil Defence Corps, the Nigeria Police Force, officials of the National Emergency Management Agency, and some residents.

One of the survivors, Hafeez Olayinka, narrated his ordeal during an interview with our correspondent.

Olayinka said, “The incident happened at night, with seven of us in the building. Five of us slept in the main building; one (a visitor who died) slept at the boys’ quarter, while the last, the late gateman, Abdullahi, slept at the security post.

“When the building crumbled around 11:30 pm, I thought I was dead, but I soon noticed that I didn’t sustain a major injury, I jumped and took to my heels. Then I saw another person beside me who was shouting, and neighbours helped us out through the roof where there was an opening.”

He noted that cops first took four of the five survivors to a general hospital to receive treatment, while the fifth survivor was brought in at about 4am.

Abdullahi’s son, Shuaibu, who’s also one of those evacuated from the collapsed building, noted that he had been sad since the incident happened, especially with the loss of his father.

He said, “I have not been happy since the incident happened. I have moved to Niger State to meet some of my family members as things got tougher after my father’s death.”

Narrating his ordeal during the collapse, he noted that the building crumbled a few hours after the 8pm Islamic prayer.

Shuaibu stated, “We had prayed together at about 8pm, and sat together within the compound till around 10pm before we all went to bed. Unfortunately, about an hour later I heard the sound of the rubble and rushed out to find out what was happening, then I discovered the collapse. I was rushed out with the intervention of residents.”

Besides, three residents in the area who spoke to our correspondent noted that some residents had warned the owner of the building not to add extra structures to the building.

One of them who gave his name only as Chukwudi for fear of victimisation noted that residents were worried during the construction which led to the collapse.

He said, “We don’t understand why the man decided to add more floors and blocks to the building. Some people warned him but he never listened, unfortunately that has led to loss of lives.”

Another resident identified only as Miss Suzan stated that residents were now worried that other houses in the area might be demolished by the FCTA due to the incident.

She said, “We are worried. We don’t know what the FCTA will do now, and we fear that they might commence demolition of other buildings around here.”

Also, another resident identified only as Mr Adebiyi stated they residents now live in fear of the FCT authorities demolishing their homes.

Adebiyi said, “We are now scared because the authorities may demolish other houses. It appears that many of them don’t have building approvals, while some might have added extra structures as opposed to what was approved.’’

Meanwhile, the FCT Administration noted that the fleeing owner of the collapsed building would forfeit the building and be charged with manslaughter, adding that the police were currently on his trail.

The Senior Special Assistant to the FCT Minister on Monitoring, Inspection, and Enforcement, Mr Attah Ikharo, confirmed this to our correspondent in an interview during the week.

Ikharo said, “The police are looking for the owner of the building to defend himself. That building has no building approval from the town planning agency. Most of the houses in that location have no building approval. People just go ahead to erect structures without going through the proper channels.

“And one thing about the FCTA, we have a policy that once a building collapses, the land is forfeited or revoked and I am sure that the FCT minister will revoke this property and convert it into a park or a garden for residents around the neighbourhood. That’s the policy of the FCTA, once a property collapses, the land stands revoked, and this is a warning to all plot owners and engineers here,”

He noted that investigation revealed that the building was initially constructed as a shopping mall, and later converted into a residential building despite warnings by residents.

“There was a shopping mall on the first floor, while he added two extra floors, and they were putting up some blocks of flats on the first and second suspended floors.

“That was the concern people around the place raised before now, that you cannot alter a shopping mall into a residential apartment, thereby giving it more load than what the foundation was meant to carry. We plan to conduct detailed investigations on what happened here, but so far so good, the FCT has ordered tests to be carried out on most of the two-story buildings around there so we can ascertain how solid they are.’’

Ikharo added that such a situation would lead to demolition of buildings in the country’s capital.

“This is one of the reasons why we mark buildings for demolition, people cry out and complain when we do it but this particular building had been marked when we saw alterations there. Yet, the owner went ahead to add additional floors and blocks. It is painful as one man’s selfishness has led to loss of lives.”

Earlier, the Minister of State for the FCT, Dr Ramatu Aliyu, who visited the scene of the incident on Friday, August 27, commiserated with the victims and affected families.

Aliyu thanked the first responders and authorities of the FCT Administration for their swiftness in rescuing the survivors. She also wished the injured a quick recovery, and prayed for the repose of the souls of the victims.

He spoke on Tuesday in Abuja at the inauguration of the FCT Executive Committee of the organisation and the Investiture Ceremony of the Chairperson, Association of Women Town Planners of Nigeria, Bello Oluwayinka.

Ayinde noted, “Plans are about visions to make a blueprint of the vision you’re seeing from your current position to a place that you want to be in years. The plan is a shoulder on the implementers saddled with the responsibility of administering budgets and resources to be able to implement those plans. Therefore, it’s not about having a plan but implementation is key.”

He added that human settlements were living organisms which grew from time to time like human beings, adding that reviewing such settlements was necessary to contemporary society.

He stated. “When the FCT master plan was made in 1976, by planning principle, it ought to have been reviewed every five years, to accommodate changing realities, technology and other things. It is important to note that the AWTPN is not to serve as a pressure group that sees its members as endangered species in the comity of urban planners nor should promote the victim mentality in its members.

“You are full-fledged urban planners who should be focused on empowering your members by robbing intellectual minds to become relevant and compete with your peers globally.”

Ayinde also noted that the increase in the cases of building collapse in the country was as a result of the Federal Government’s failure to plan properly.

Stating this on Thursday during the inauguration ceremony of the Ogun State Chapter of the Association of Town Planning Consultants of Nigeria in Abeokuta, he noted that the government of the Federation lacks an understanding of what the concept of town planning is.

The Urban Planner, maintained that the government at the centre must fund planning and its implementation if there will be a reasonable physical development in Nigeria.

While expressing concern about the nation’s underdeveloped state, Ayinde argued that the country’s development would continue to be a mirage until the government began to take the issue of planning seriously.

“Nigerian governments don’t even understand what planning is and until they do that they cannot commit resources. The truth is that there’s nothing we can really achieve without planning, so we must be joking as a nation if we are not funding planning because alternative to planning is chaos which is what we live in,” he added.

Mubdiyu, who spoke in an interview with our correspondent, noted that building collapses were due to circumvention of plans, lack of proper planning for buildings, and obsolete city master plan.

He further said that night life and night economy were inactive in the country’s capital city due to the government’s inability to review the city’s 1976 master plan.

Earlier on Wednesday, during the inauguration of the FCT Executive Committee of the institute, as part of events to commemorate the forthcoming Town Planners Day, 2022, Mugdiyu noted the institute was demanding a review of the original master plan of the FCT, to make provisions for the basic social and infrastructural amenities, and to encompass current and future realities of a city.

He stated, “We hope that this year’s celebration will provide a robust platform for discussions and engagements to chart a path for sustainable urban governance and strengthen existing structures and systems.”