Rebecca Searing, 51, knifed Paul Searing, 57, twice in the abdomen as he lay in bed at their home in Ryecroft, Harlow, Essex on 12 February. 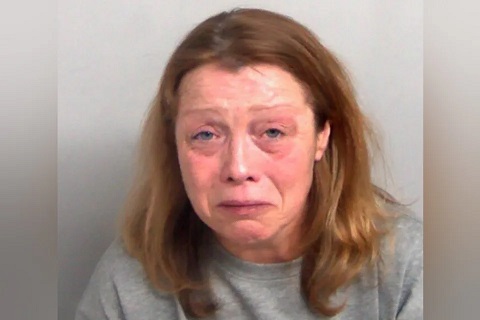 A nurse who killed her husband while he lay in bed has cried profusely.
She cried in a mugshot of her taken by the police.
She is now facing life behind bars after being convicted of his murder.
Rebecca Searing, 51, knifed Paul Searing, 57, twice in the abdomen as he lay in bed at their home in Ryecroft, Harlow, Essex on 12 February.
She called the ambulance as he lay in bed, and was downstairs when police arrived as paramedics battled to save him.
He was rushed to hospital but died three hours later.
When officers arrested Searing she made a number of significant statements, seeming to admit she had attacked her husband, stating “I can’t believe I’ve just done this” and “I will go down for this”.
Searing was further arrested on suspicion of murder and made further comments which also seemed to admit she had attacked him.
A bloodstained knife was found inside their home.
During the trial, the jury heard she asked one officer while in custody: “I am gonna get 25 years for this aren’t I?”.
However, when she was interviewed, she replied "no comment".
Searing denied murder, but was convicted by a jury on Thursday.
She showed no emotion as the verdict was read out.
Investigating officer Detective Inspector Lydia George said: “Paul Searing lost his life in a moment of extreme violence and Rebecca Searing’s actions were fatal.
“And while she may have some regret for what has happened, that cannot undo the consequences of her actions.
“She now faces a life sentence and a significant amount of time behind bars.”
Searing will be sentenced at Chelmsford Crown Court on 7 September.
Top Stories