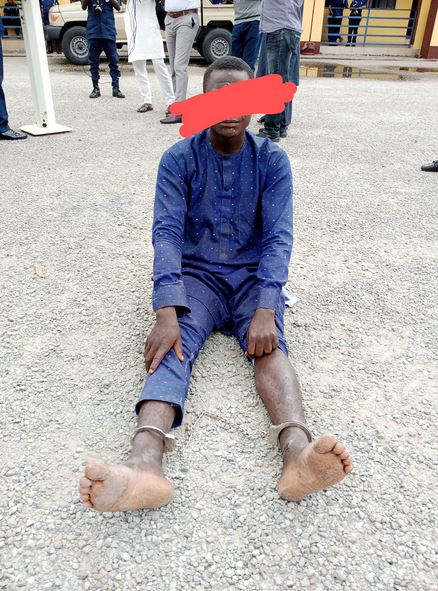 A 25-year-old suspected kidnapper and cattle rustler identified as Tukur Mohammed has been apprehended by the Nigeria Security and Civil Defence Corps (NSCDC) in Lafia, the Nasarawa state capital.

Briefing newsmen at the Command Headquarters in Lafia on Monday, September 12, the state commandant Abbas Bappa Muhammed, who spoke through the Public Relations Officer, Jerry Victor, said the suspect has been terrorising Abaji area council of the Federal Capital Territory (FCT), Nasarawa and Toto local government areas of Nasarawa state.

The Special Intelligence Squad (SIS) arrested Mohammed of Tsafe local government area of Zamfara state, after a credible and reliable information on the whereabouts of the suspect who has been under the Squad's radar for some times now.

"The suspect confessed to be a member of a deadly, notorious kidnapping syndicate and infamous gang of cattle rustlers, that specialised in rustling cattle and kidnapping for ransom around Abaji Area Council of the FCT, Nasarawa and Toto Local government areas of Nasarawa state," he said.

"Investigation revealed that the syndicate kidnapped one Malam Ibrahim between Nasarawa and Toto local government area of Nasarawa state together with his gang and demanded N10,000,000 as ransom, after they collected N1,000,000 that was found in the victim’s vehicle,"

"While waiting for the ransom, they were dislodged by the combined operation of the Nigerian Army and the Vigilante group, leading to the shooting of some of his gang members, while him and others escaped.

"The suspect also revealed that him and his gang, rustled over 50 cattle which they shared amongst themselves. He got four as his shares and sold same for N30,000 each to one butcher in Nasarawa Local government area,"

The State Commandant reiterated the Corps readiness in combating crimes and criminality in the state.

"The criminals only have one option, change a new leave or face the full wrath of law, as the Corps will not and will never relent in its efforts in getting rid of the criminals in the State," he added.

He called on the good people of the state to make available credible and reliable information to security agencies closer to them.