They were equally joined by the presidential candidate of the African Action Congress, Omoyele, Sowore. 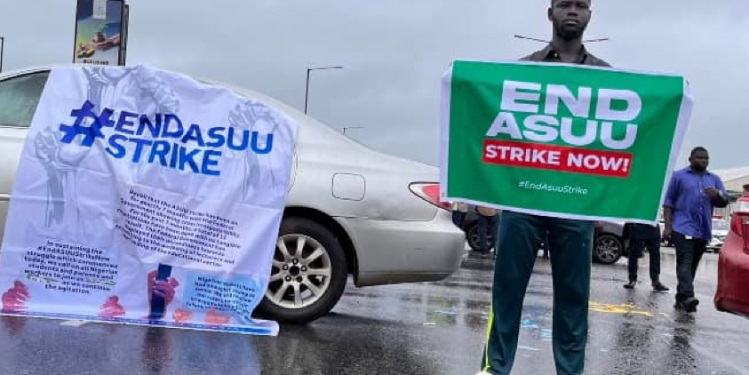 The National Association of Nigerians Students (NANS) has vowed to take protest to other places in Lagos state.
According to NANS, its protest at the Murtala Muhammed International Airport is only a preamble.
The group threatened to embark on a week-long protest till the Federal Government accedes to its demands on the resolution of the strike action of the Academic Staff Union of Universities.
NANS said it was ready to ground the Nigerian Ports Authority and the Third Mainland Bridge in Lagos.
A statement, Monday, by its Chairman, NANS National Taskforce on #EndASUUStrikeNow, Ojo Raymond, read, “For the past few days, we have been protesting simultaneously round the states of the country to protest the continued ASUU strike which has lasted over seven months as a result of the ‘crass irresponsibility’ of the Federal Government to fulfil the terms of the agreement they willingly signed with ASUU.
“As an association, we are saddened by this development which has resulted in the closure of universities . And, this act, we believe, is deliberate by the Federal Government to deny the children of the common Nigerian access to quality education which violates the provisions of Chapter two of the Constitution of the Federal Republic of Nigeria, 1999 (as amended).
“We are using this medium to reiterate that this protest continues and that we will not for any reason back down until the Federal Government takes the educational sector as a priority. It is quite pathetic that the Federal Government is making use of the armed forces to quench a genuine struggle of Nigerian students despite the fact that these officers are also victims of the system whose children are also affected the same way we are.
“Today’s protest at Muritala Muhammed International Airport (Domestic and International wings) is just a preamble of what is to come in days ahead. And, we are informing the general public and the international community to pay serious attention to this struggle because we have been duly informed of the plan of the Federal Government to mobilise heavily against this protest. This was even witnessed today as anti-riot police officers and men of the Air Force were mobilised to attack us not until they were prevented by the mass of Nigerian students.
“We maintain that this protest shall last a week here in Lagos State and would be held simultaneously at the Muritala Muhammed International Airport, Nigerian Ports Authority and the third mainland bridge until our demands are met.
The PUNCH reported that NANS grounded the MMIA on Monday, causing traffic by blocking the road leading to the airport.
They defied the downpour to express their grievances at the airport.
The students held banners bearing inscriptions such as: “No nation can develop without genuine commitment to education,” and “If you have money for election form, you can fund education.”
They caused traffic around the airport amid the presence of a combined team of officers of the Lagos State Police Command, Rapid Response Squad, Lagos Airport Police Command, and other security agencies.
They were equally joined by the presidential candidate of the African Action Congress, Omoyele, Sowore.
Top Stories