An eyewitness, who pleaded anonymity said the accident took place as a result of speeding on the apart of the truck driver. 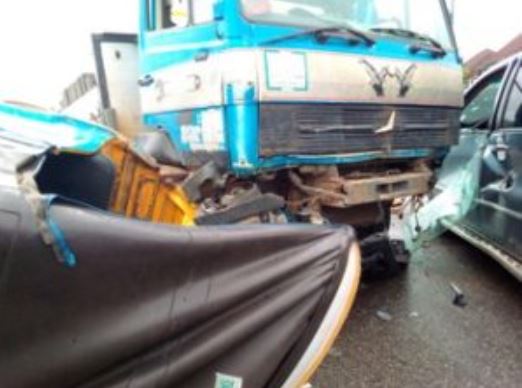 PUNCH Metro reports that as many as  four persons have escaped death in a multiple accident in Delta State.

The accident occurred on Monday, along Anwai road, near the Delta State Government House in Asaba.

PUNCH Metro reports that the accident, which involved a truck loaded with blocks, a Lexus car, a Toyota Sienna and a tricycle few metres away from the government house gate, caused gridlock along the road.

When our correspondent arrived the scene of the accident, the Lexus car had been removed and police officers were already controlling the traffic. A towing van was on ground removing other vehicles involved in the accident and the tricycle driver was been rushed to the hospital.

An eyewitness, who pleaded anonymity said the accident took place as a result of speeding on the apart of the truck driver.

“The truck was coming from summit area while the tricycle and Toyota Sienna drivers were waiting at four junction. The Lexus car coming from government house gate then tried to enter the road without being patient.

“The truck driver was driving at top speed and he could not apply his brake when the Lexus car entered. He immediately veered to where the tricycle and sienna drivers were waiting and smashed the three vehicles.

“The tricycle operator and one other were rushed to a federal medical center with serious injuries while two occupants of the sienna and one occupant of Lexus car sustained minor injuries.” He said.

As at the time of filling this report, a towing van was already on the ground removing the vehicles, and officers on ground declined comment, saying they were not authorised to speak.