An insider privy to the meeting said some top aides of both the governor and the presidential candidate were at the meeting. 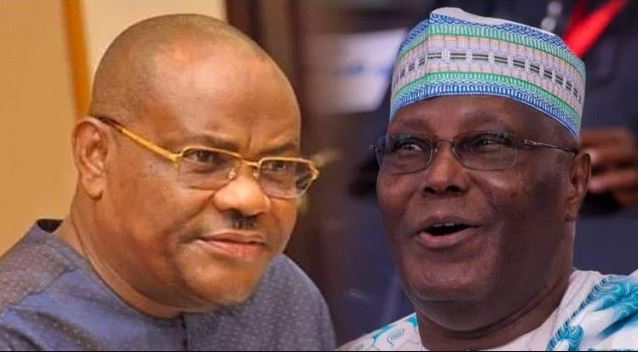 Atiku Abubakar, the presidential candidate of the Peoples Democratic Party, has continued his quest to find reconciliation over the crisis in the party.

The former vice-president has again met with the Rivers State Governor, Nyesom Wike.

An insider privy to the meeting said some top aides of both the governor and the presidential candidate were at the meeting.

The duo met at the Rivers State Governor’s Lodge in Abuja on Thursday.

Recall that Wike has been at loggerheads with Atiku and the PDP over issues bordering on the sharing of positions in the party, a development that led to the call by Wike’s camp that the national chairman of the party, Senator Iyorchia Ayu, should resign.

It was learnt that some members of the Atiku camp were dissatisfied with the treatment meted on the presidential candidate on some matters bordering on the crisis in the party.

According to a report, the former vice-president, who set the ball rolling on the discussion charged Wike  to join hands and work together with him to resolve the rift.

A source stated, “But we were surprised by how Wike responded. The governor recalled the London meeting and the agreement reached, the pledge that the former vice-president will revert after a fortnight and how the matter was swept under the carpet.”

It was also gathered that a party chieftain noted that according to the Rivers State governor, members of the Board of Trustees were in concurrence that the national chairman should resign, but some others were asking him to stay.

However,  pledged to revert to his supporters after talking with them before any decision could be taken.