Amadi was reported to have escaped death by the whiskers as the adorers tried to lynch him as soon as he was introduced as Mbaka’s replacement. 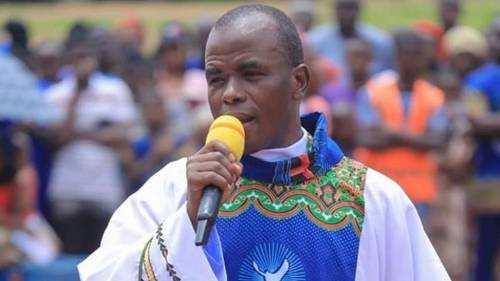 Apex Igbo socio-cultural organization, Ohanaeze Ndigbo has reacted to the transfer of the spiritual director of the Adoration Ministry, Enugu, Nigeria, AMEN, Rev. Fr. Ejike Mbaka to a monastery.
The group condemned the posting.
Recall we reported that three months after Mbaka returned from punishment following his messages against Peter Obi of the Labour Party, he has now been sent to Auchi in Edo State, he has been sent to a monastery where he is expected to remain till next year.
In the interim, Rev. Fr. Anthony Amadi will superintend over the Adoration Ministry, a development that is already generating protest from Mbaka’s followers.
Amadi was reported to have escaped death by the whiskers as the adorers tried to lynch him as soon as he was introduced as Mbaka’s replacement.
In a statement made available to DAILY POST on Wednesday, the Ohanaeze Ndigbo Youth Council Worldwide said the latest decision of the Catholic Diocese of Enugu against Mbaka was a continuation of the age-long witch-hunting of the priest.
Mazi Okwu Nnabuike, the National President of OYC, who signed the statement said the group had over one year ago alerted of a sinister plot to take over the Adoration ground.
“Sometime last year, we did raise the red flag that there was an orchestrated campaign against Rev. Fr. Ejike Mbaka by his colleagues in the ministry who are jealous of his spiritual gifts.
“We said then that we uncovered a sinister plot to take over the Adoration Ministry which Fr. Mbaka personally laboured to build over the years, after he was chased out of CKC, GRA, Enugu on a punitive transfer.
“How can we explain a situation where someone just returned from three months’ punishment only to be sent to a monastery in Edo State?
“While we do not challenge the fact that the Bishop has the prerogative to transfer the priests under this watch, it must be noted that Mbaka is not just like any other priest.
“Here we are talking about a priest who is catering for the welfare of thousands of indigent Nigerians, irrespective of their origin and religion. He goes along and pays their school fees, house rent, hospital bills, among others. Is there any other priest in Enugu State that is in such a humanitarian mold? The answer is ‘No’”.
Okwu said in the light of the above, there would be dire consequences as long as Mbaka stayed away.
“Many people will lose their jobs; many will drop out of schools; the consequences of this decision will be more than anyone has imagined.
“This is why we have always appealed to his Lordship, the Bishop, to handle Mbaka’s case with caution but it is like some people are influencing him negatively.
“As Igbo youths, we are concerned about the aftermath of this development and our stand is that the Church should not complicate the issues already plaguing the society,” the Igbo youth President cautioned.
Meanwhile, Fr. Mbaka in his last message before he announced his replacement on Sunday had said some people were just wasting their time with regards to the 2023 presidential election.
He, however, said God told him not to reveal the details of the prophecy.
“This vision is an appointed time; it is not for me to come and speak here. If God has not constrained me, I will just give Nigerians a simple solution, because it is like many people are wasting their time,” he said.
But while departing for the monastery on Wednesday, he urged his followers to cease from further protest. He said they should rather pray for him.
Top Stories