The Federal Road Safety Corps (FRSC) confirmed that the incident occurred in the early hours of the day, leaving three persons with burns. 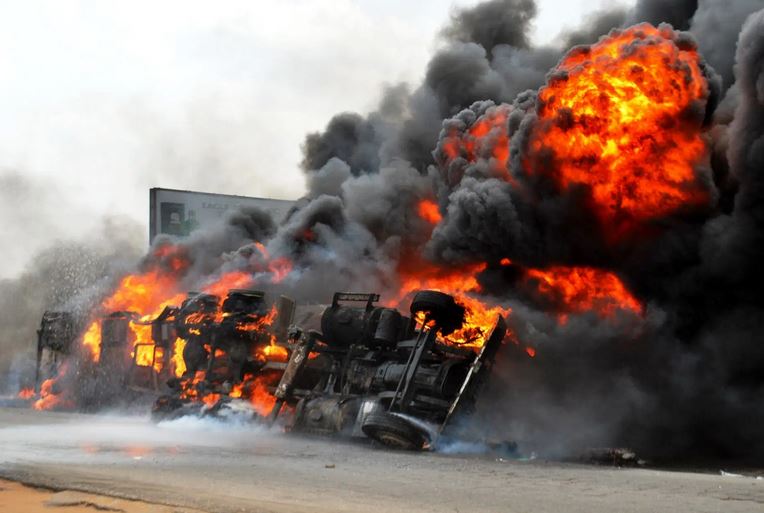 Daily Post reports that two persons were burnt beyond recognition in the petrol tanker explosion that occurred in Ogun State on Thursday.

It was learnt that 12 vehicles were also gutted by fire in the incident that happened at Sango-Ota Old Toll Gate Plaza, along the Lagos-Abeokuta road.

The Federal Road Safety Corps (FRSC) confirmed that the incident occurred in the early hours of the day, leaving three persons with burns.

FRSC spokesperson in Ogun, Florence Okpe, told newsmen that the tanker was ascending the Ilo Awele slope, adjoining the Abeokuta-Lagos section of the expressway, when it fell around 1:30am, spilled its content and went up in flames.

“Men of the fire service were contacted immediately and the area was cordoned-off to prevent a secondary crash,” Okpe said.

She added that as at 4:05 in the morning, “a total of 12 vehicles were involved, which comprised three luxury buses, four tricycles, three motorcycles, one yellow bus and a tanker.”

“Two bodies burnt beyond recognition have been evacuated from the scene.

“The suspected cause of the multiple crash was mechanical deficiency. While ascending, the vehicle rolled back and got hooked. The content spilled off and there was fire outbreak.”